gatherings. The Start-up Station confabs are bimonthly events where faculty members and students present technologies and outline business plans for commercializing those technologies. About 30 representatives of the venture capital community listen to the presentations, question the presenters about technological and commercial viability, and offer suggestions. The gatherings segue into buffet-style confabs, where the participants can continue their discussions informally.

Responsible for planning and coordinating Start-up Station is Sakae Takagi, an associate professor in Tokyo Tech's Office of Industry Liaison. Takagi knows his way around the venture capital community. After working as a management consultant at a leading think tank, he joined a friend at a start-up business. That first venture didn't work out, but a second venture that he joined grew rapidly and eventually was acquired by a large computer company. Tokyo Tech recruited Takagi in 2006 to help coordinate efforts to foster and manage intellectual property more aggressively. He inaugurated the Start-up Station initiative in 2008.

"Faculty and students have launched a couple dozen venture businesses since I've been here," reports Takagi. "People are beginning to regard entrepreneurship as a natural part of university life. Young Japanese have traditionally preferred the security of jobs at big and well-known companies over the risks inherent in start-up ventures. But that is changing. And an important part of my job is to promote that change. I'm working to encourage faculty and students to at least consider entrepreneurship as a legitimate career option."

The atmosphere at Start-up Station gatherings suggests that Takagi is making progress. Each presentation receives careful attention from the venture capitalists in attendance. And the Start-up Station encounters have led to serious follow-up discussions. The sixth installment in the series, held in June 2009, was representative. It featured presentations by two faculty members. One was in the midst of establishing a company. The other was simply looking for ways to market his consulting services more effectively.

Xiaolin Zhang, an associate professor in Tokyo Tech's Precision and Intelligence Laboratory, is launching a venture enterprise to develop and supply "active stereo vision systems." Zhang incorporates biological principles in robotic 3-D cameras. He took an interest in the way the eye's musculature rotates and adjusts the shape of the eyeball to follow objects and keep them in focus. Zhang has developed stereo camera systems in which servos move the paired cameras to find and follow objects smoothly. And he has employed magnetic linkages that avoid physical contact between the moving parts and thereby avoid the problem of friction-caused wear.

Humans and other primates, equipped with stereo vision, focus both eyes on the same point on the surface of an object. Our stereo vision allows us to grasp the orientation of the object in three-dimensional space. Zhang uses paired cameras that have an overlapping field of vision and that support a 3-D reconstruction algorithm. His system emulates the neural pathways of the human binocular motor system and tracks objects with stunning accuracy. He is promoting the system in such applications as surveillance and materials handling. 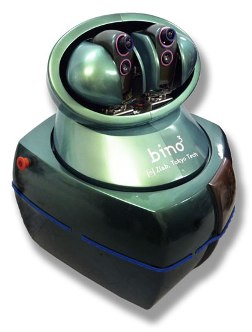 Following Zhang on the Start-up Station dais in June was Kenji Amaya, a professor in the Department of Mechanical and Environmental Informatics in Tokyo Tech's Graduate School of Information Science and Engineering. Amaya employs an approach to scientific and technological inquiry known as inverse analysis. He upturns the deductive approach of using models to predict the output that will result from specified inputs. Instead, Amaya employs an inductive approach. He starts with the desired output and uses models to determine what inputs might produce that result.

The idea of using inverse analysis occurred to Amaya years ago, when he was studying metal corrosion. Operators of oil tankers, for example, spend heavily on dry dock inspections to measure the rust in their cargo tanks. Amaya knew that corrosion affected electrical potential. And he developed a model for predicting the pace of corrosion on the basis of electrical measurements. Shipping companies can conduct the measurements easily while the ships are in operation. So Amaya's method reduces the need for expensive dry-docking. His automated system also reduces the amount of labor entailed in inspection work. And it eliminates the need for inspectors to undertake the unpleasant and sometimes dangerous work of descending into tanks to inspect them visually.

Shipping companies could save millions of dollars in annual dry dock expenses by adopting Amaya's approach. The professor has also put his inverse analysis to the service of companies in other industries. Manufacturers of semiconductor devices, for instance, have used his approach to monitor the quality of film deposition in real time. Amaya doubts that his methodology is a suitable basis for launching a company. He welcomed the chance, however, to meet with venture capitalists at Start-up Station and discuss ways to promote the methodology more effectively and more lucratively.