Aerobic oxidation is a simple process for converting one compound into another with minimal organic waste, and is the ultimate goal for researchers working on oxidative transformation. Takao Ikariya's group has developed a new series of catalysts to induce aerobic oxidation, comprising so-called half-sandwich mono- and binuclear complexes made up of metals from group 8 and 9 of the periodic table, and bearing a metal/nitrogen-hydrogen bifunctional unit.

Firstly, Yoshihito Kayaki has found that an iridium amide complex serves as an effective catalyst for aerobic oxidation of secondary and primary alcohols into their corresponding ketones and esters, under mild conditions. The catalysts, which are chiral in shape, can also induce the 'kinetic resolution' of racemic alcohols—which contain a mixture of molecules of different chirality—to give very pure chiral alcohols.

In addition, Shigeki Kuwata has discovered that a novel imido-bridged dirhodium complex, which has an acid/base bifunctional property, can promote aerobic oxidation of a secondary alcohol, and even oxidizes molecular hydrogen under mild conditions.

The aerobic oxidation with these bifunctional molecular catalysts relies on the simple activation of hydrogen and oxygen molecules. The group's findings provide a novel, environmentally friendly way of inducing oxidation with a minimal amount of organic waste. 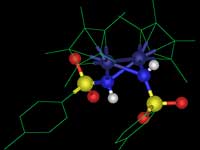