In all aerobic organisms, porphyrins are essential compounds that bind and provide functionality to cytochromes—membrane-bound proteins required for the transfer of electrons in the respiratory system. However, if porphyrins accumulate in cells they can cause oxidative stress when irradiated with near-UV light. Therefore, these inherited or acquired disorders of porphyrin biosynthetic pathways, called porphyrias, primarily affect the skin, causing photosensitivity.

Now, Ryoko Tatsumi and Masaaki Wachi at Tokyo Institute of Technology have shown that the so-called TolC-dependent efflux system is involved in exporting porphyrins from the bacterium Escherichia coli. The channel-tunnel protein TolC is found in the E. coli outer membrane, and is responsible for excluding harmful substances such as antibiotics, dyes, organic solvents, and detergents from the cell. As shown in the figure, tolC mutant cells grown in the presence of 5-aminolevulinic acid, a precursor of porphyrins, accumulated a large amount of porphyrins. On the other hand, wild-type cells secreted porphyrins from the cell. These results suggest that porphyrins are exported through the TolC-dependent efflux system in E. coli.

In the cells of eukaryotes, such as humans, porphyrins are synthesized in mitochondria, which are believed to have evolved from an ancient bacterium closely related to E. coli. Therefore the findings of Tatsumi and Wachi could contribute to understanding the pR.

Journal of Bacteriology 190, 6228-6233 (2008)
Department of Bioengineeringorphyrin transport system in mitochondria. 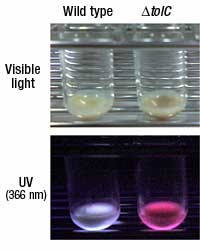