Katsuro Hayashi and colleagues at the Materials and Structures Laboratory demonstrate the selective generation of atomic oxygen from solid oxide sources for the first time. These findings will find a wide range of applications in the electronics industry.

Oxygen is an unsung hero of the electronics industry, being extensively used for producing ultrathin silicon dioxide layers in the microelectronics industry. Notably, "atomic oxygen"—a highly reactive species formed when the bonds of molecular oxygen are broken—is important for the development of automobile catalytic converters, solid-state fuel cells, and related applications.

The addition of yttria to pure zirconia leads to the generation of large numbers of oxygen vacancies in the zirconia lattice, resulting in an electrically conducting material with applications ranging from solid oxide fuel cells and thermal coating in gas turbines to nonmetallic ceramic knives and restoration of teeth.

Here, Hayashi and coworkers used quadrupole mass spectrometry (QMS) to analyze the gaseous species emitted from an incandescently heated yttrium oxide doped zirconia tube in a vacuum. More specifically, molecular oxygen with a pressure of between 10 to 3,000 Pa was passed through a zirconia tube with an outer diameter of 2 mm, and the central 10 mm region of the tube was heated to 1,400–1,800°C (figs. 1 and 2). The intensity of atomic oxygen emitted from the hot region of the zirconia surface tube decreased as the distance (d) between the QMS and the zirconia was increased, and, notably, the atomic oxygen intensity was proportional to 1/d2 for separations greater than 40 mm.

But what led Hayashi and colleagues to conduct these experiments? "Originally, we were seeking to induce a singly charged oxygen anionic (O-) emission from solid oxide electrolytes by applying electric fields," says Hayashi. "Our idea was very simple. That is, since O- ions are stable under vacuum conditions, extraction of oxide ions—or other anionic oxygen species—from metal oxides should lead to direct emission of O- ions. Our goal was to replace conventional negative ion sources, which use plasmas and highly reactive electronegative metals."

But Hayashi confides the results were unexpected. "We were very much surprised by our findings," says Hayashi. "The O- emission obtained from our apparatus was much less than we had expected. In fact, a theoretician confirmed that extraction of O- ions is difficult, but he said that neutral atoms should be easier. And he was right."

"We are manufacturing and testing a compact prototype system for high vacuum applications, such as pulsed laser deposition chambers," says Hayashi. "We are also planning experiments for drastically enhancing the atomic oxygen emission. Collaboration with theoreticians for a deeper understanding of atomic oxygen emission is also important."

This discovery will find a wide range of applications in vacuum technology in areas including low-temperature deposition of nanolayers of insulating oxides on semiconductor surfaces, fabrication of thin films of new oxide materials, and modification of the surface properties of materials.

Fig. 1: Experimental setup showing the zirconia tube and molecular oxygen feed. The inner zirconia tube is hermetically sealed from the outside by graphite sealants and stainless steel connectors for electrical connections to the internal electrodes. 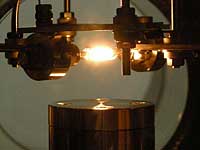 Fig. 2: Photograph of the apparatus showing the intense light resulting from heating the zirconia tube inside the vacuum chamber. 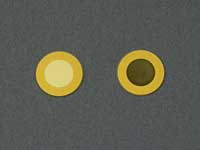 Fig. 3: Atomic oxygen oxidized the silver layer on a crystal oscillator sensor. The image on the left shows the silver before oxidation, and the one on the right is after oxidation using the zirconia tube.