Low-mass stars, known as M-dwarfs, have relatively low luminosity compared to our Sun. This means that their habitable zones, in which water can exist on a planetary surface to enable life, are located at small orbital radii from their host stars—about one tenth of that of the Earth.

Planets have recently been observed for the first time around M-stars, however there is a lack of theory to predict the distributions of mass and orbital radii of such planets, and how often they could be expected to form. To shed light on this subject, Shigeru Ida and his graduate student, Masahiro Ogihara, have investigated how planets may form by accretion of smaller chunks of debris, called planetesimals, in habitable zones around M-dwarfs.

The researchers performed so-called N-body simulations to calculate mutual gravitational interactions among developing 'protoplanets' and planetesimals. Their simulations included orbital migration due to gravitational interactions of protoplanets with protoplanetary gas disks, which plays a key role in formation of close-in habitable Earth-like planets around M-dwarfs. All the simulations were performed on special-purpose computer hardware called 'GRAPE', developed by the National Astronomical Observatory of Japan and the University of Tokyo.

"We found that migrating protoplanets are captured in mutual resonances, and they start crossing orbits after the gas disk decays," says Ida. "We predict that through merging of the protoplanets, several planets in widely separated non-resonant orbits are formed, which is consistent with observed results."

The predictions allow for the formation of robust close-in planets similar to Earth, suggesting that 'habitable' planets may be common around M-dwarfs. 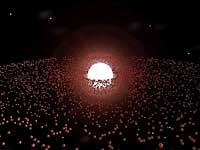 A simulation of planetary accretion from many small planetesimals around a low-mass star (created by Masahiro Ogihara).