Scientific affairs of the heart

Cardiovascular research at Tokyo Tech is thriving. This year, two papers were published in the prestigious journal Nature that reveal important genetic factors involved in the evolution and development of hearts.

One of the papers outlines the crucial genetic elements required to produce mammalian heart cells during embryonic development, and could give clues on how to repair damage to the heart. The other describes the genetics of developing reptile hearts, and concludes that reptiles represent an intermediate stage in heart evolution. Most interestingly, both papers reveal a crucial role for a gene called Tbx5.

"Jun and I were in the same lab when we graduated as undergraduate students," says Kazuko. "Our interests are very similar on the broad scale, but on a detailed level we are in different fields. Jun is interested in the molecular level of heart development, such as DNA-protein interactions, whereas I am interested in the morphology implications. So we can have deep discussions about heart development and help with each other's weak points!"

Jun's research, published in Nature in June2, was driven by concern that the heart has only limited capacity to regenerate itself after damage. He and his co-worker Benoit Bruneau at the University of California determined to find out exactly which molecules were required to produce new heart cells known as cardiomyocytes from surrounding tissues.

Their work was influenced by recent studies that revealed a key role for so-called 'BAF chromatin-remodeling complexes' in inducing heart growth. In particular, mouse embryos that have reduced levels of one of these complexes, called Baf60c, show severe heart defects.

Jun and Bruneau induced various different gene expression patterns in cultured mouse embryos, and monitored the embryonic heart development. They found that Baf60c and a transcription factor called Gata4 were both very specifically located in cardiac tissue, and together were sufficient to kick-start cardiac gene expression.

However these two compounds were not enough to actually induce the formation of contractile cardiac tissue. This last step requires additional input from the transcription factor Tbx5.

Jun's work implies that these three compounds— Baf60c, Gata4 and Tbx5—represent minimal requirements for producing beating cardiac myocytes. "These factors are embryonic genes, and they are not expressed in adulthood," he remarks. "If these factors are re-expressed during an injury in an adult, the heart could have high regenerative capacity, similar to fishes or amphibians."

In future Jun hopes to identify mechanisms for recovering these embryonic genes. Such findings could potentially enable scientists to produce cardiac cells 'on demand' for medical therapies, as Jun explains:

"Previous protocols for induction of cardiomyocytes used secreted molecules such as bone morphogenetic proteins (BMPs), WNTs and retinoic acid. However some cells differentiated into neuron or cancer cells, suggesting that this system will be dangerous for heart therapy. Our technique controls cell fate at the gene-level, and we checked that all cells differentiated into cardiomyocytes and not neuron, skeletal muscle or cancer cells."

Kazuko's work has been equally well-received, and even reached the front cover of Nature's 3 September edition1. Her paper focuses on the evolution of reptile hearts, in light of the fact that many land-dwelling animals have hearts that are divided into chambers called ventricles, separated by a 'ventricular septum'. Scientists believe this structure began to evolve when the first creatures stepped onto land millions of years ago.

"The vertebrate life style changed from aquatic to terrestrial, meaning they needed much more energy, so they evolved more sophisticated circulatory systems," explains Kazuko. "The main benefit was to provide two independent systems—the pulmonary and systemic circulations. As a result, vein and artery blood are completely separated."

This is certainly the case for mammals, birds and crocodilians, while amphibians have only one ventricle. But reptile hearts are more of a mystery. It can be argued that some reptile species have either one single ventricle, or two ventricles that are not completely separated.

To investigate what causes this apparent underdevelopment in reptiles, Kazuko and co-workers studied gene expression in the ventricles developing in embryos of red-eared slider turtles and green anole lizards (Fig. 1). They found that both species initially formed a single chamber expressing the gene Tbx5. Later, the turtle, but not the anole, showed Tbx5 expression restricted to the left side of the chamber, gradually producing a distinct left ventricle.

"We already knew that if Tbx5 is mutated or deleted in mice or humans, the formation of the ventricular septum is disturbed," says Kazuko. "These results indicate that Tbx5 is one of the key molecules involved in septum formation."

The septum is non-existent in anoles, and not so well-defined in turtles as in birds and mammals (Fig. 2). Kazuko and co-workers suggest that reptile hearts evolved this way because, being cold-blooded, reptiles may need less energy to survive. The reptiles may even benefit from this heart structure, by being able to survive in low levels of oxygen. Even more interestingly, the reptile heart almost certainly resembles an intermediate evolutionary stage between those of amphibians and mammals.

These two ground-breaking studies represent further progress on Kazuko and Jun's journey of genetic discoveries. And it is not the first time they have encountered Tbx5, as Kazuko explains:

"When Jun and I started studying Tbx5, our original focus was on limbs and retinas, and we didn't think we would keep in touch with it for such a long time. But Tbx5 is a very exciting molecule and plays key roles in many organs at several developing stages."

For the moment, Jun and Kazuko will continue to work on separate projects, but certainly benefit from their informal collaborations 'behind the scenes'. One thing is in no doubt—these impressive scientists are among the world's best candidate's to unlock the secrets of Tbx5 and other genes.

Figure 1 : Reptiles such as the red-eared slider turtle and the green anole have heart structures representing an intermediate evolutionary stage between mammals and amphibians.

Figure 2: Heart structures of green anole lizard, red-eared slider turtle and chick (top row) and Tbx5 gene expression in each species (bottom row). The anole has only one ventricle, the chick has two ventricles divided by a clear inter-ventricular septum (marked 'ivs'), and the turtle has two ventricles divide by a rather indistinct septum (marked 'ivs?'). In the anole Tbx5 was expressed throughout the entire ventricle, while the chick showed Tbx5 expression clearly restricted to the left ventricle. The turtle shows an intermediate pattern, with Tbx5 expression slightly greater on the left side, producing a gradient from left to right. 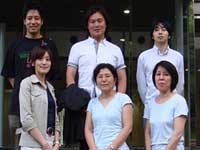 Jun K. Takeuchi (upper middle) and Kazuko Koshiba (lower middle) are working together with their students and research assistants at Tokyo Tech's Suzukakedai campus, in Yokohama.