Robots should help people, should complement the human element," emphasizes Tokyo Tech's Shigeo Hirose. "I'm more interested in liberating people from dangerous or burdensome work than in mimicking human characteristics. You won't find many robots here of the comic book humanoid variety. Our robots look like what they do."

And what Hirose's robots do spans an astounding range of functionality. The professor and his colleagues and students have created robots to clear mines from former battlefields, rescue victims at disaster sites, inspect power transmission lines, monitor structural integrity inside nuclear power plants, and perform numerous other tasks, including more-familiar robot applications in factories.

Hirose is a professor in Tokyo Tech's Department of Mechanical and Aerospace Engineering. He has been a faculty member at the university since earning his doctorate there in 1976 and is also an honorary professor at the Chinese Academy of Sciences' Shengyang Institute of Technology. Hirose has received more than 40 awards from scientific societies and agencies for his trailblazing work in robotics. In 2006, he received the Japanese government's prestigious Medal with Purple Ribbon, awarded for outstanding accomplishments in science, technology, and the arts. He received an award recently from Nissan Motor Co., Ltd., for a robot that has eased the work of installing automotive transmissions.

A hallmark of Hirose's robotics has been his continuing advances in mobility. His creations swim and slither, as well as walk and crawl. "I have always been intrigued by the way snakes propel themselves without using legs," says Hirose. "So I tackled snakelike movement in one of my earliest robots, in the early 1970s. I was amazed that it really worked, actually slithered along, and I've been devoted to robots ever since."

Hirose investigated snake movement by fitting live snakes with electromuscular meters and with conventional force meters. His group devised a "serpenoid curve" to account for the sinusoidal undulation of the body of a snake in motion. And he has applied that curve and related findings in an evolving series of snakelike robots. Those robots include mechanisms that can wrap around objects--even people, such as geriatric patients in need of physical support--and apply smoothly modulated and precisely controllable grip.

Walking robots, meanwhile, are more agile than wheeled vehicles on steep slopes. Hirose is developing ambulatory robots for applications in civil engineering and in other fields.

A United Nations request to develop robots for clearing landmines exposed Hirose to social frictions that well-meaning innovation can cause. On his travels to Afghanistan, he discovered that clearing landmines is a source of employment for numerous Afghans.

"These people make their livings by finding and removing mines," explains Hirose. "So they regarded our robot-development project as a threat to their livelihoods. We finally won them over by promising that they would still have jobs--the far-safer work of overseeing the robotic landmine removal. That's exactly the role that I envision for robots in society. Robots should not displace people. Rather, they should help us accomplish more." 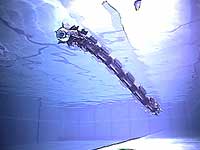 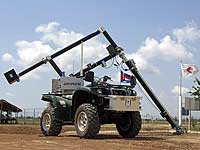 Robots that Hirose is developing to remove landmines could help rid the world of an especially appalling legacy of war. 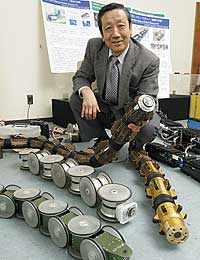 "We built all our robots on an ad hoc basis for a long time. But after doing this for 30 years, I've finally worked out a somewhat systematic approach to robot design. I'd like to write it up in a book, but that'll probably need to wait until I've retired!"