A challenge in basic quantum chemistry

Quantum chemists have often hoped that it may be possible to calculate the ground state energy of an atom or a molecule without the need for traditional wavefunction-based methods. One method, first proposed in the 1950s, requires variational calculations on so-called second-order reduced density matrices. However it wasn’t until the late 1990s that scientists realized that this approach is equivalent to a well-known problem called a semidefinite program, and can be solved using optimization software on parallel computers.

Since 2001, Mituhiro Fukuda of Tokyo Tech’s Department of Mathematical and Computing Sciences, Maho Nakata of RIKEN, Bastiaan J. Braams of AIEA, Jerome K. Percus of New York University and other co-workers have been imposing different ‘N-representability’ conditions on the density matrices to obtain tighter approximations for the ground state energies. In particular, computations imposing certain conditions called P, Q, G, T1, and T2’ seem to be comparable to using the CCSD(T) method, which is generally considered to be the gold-standard in quantum chemistry. The largest system they solved was the H2O molecule in the so-called 1A1 state; this gave an energy just 0.4 miliHartree lower than the full configuration interaction calculation, whereas CCSD(T) gave a difference of 0.55 miliHartree. 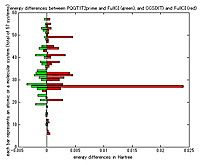