However, understanding and mimicking the complex movement of human eyes is extremely challenging, and there have been valiant attempts at producing artificial stereo vision systems consisting of remote controlled CCD cameras.

The key point to understand is that human eyes cannot focus two separate objects simultaneously, and that human eyeballs in fact rotate in separate directions when approaching or moving away from a target—so called ‘cooperative eye movements’.

Xiaolin Zhang is at the Precision and Intelligence Laboratory, and inventor of ‘active stereo vision systems’, based on a deep understanding of the cooperative movements of human eyes.

“My robot-eyes-system enable the realization of three dimensional visualization of objects,” says Zhang. “We conducted a thorough analysis of binocular movement based on system control engineering.” Based on this analysis, Zhang developed a robotic system consisting of two CCD cameras with unique peripheral control mechanisms, enabling unsurpassed 3D imaging.

The robotic system is capable of maintaining a constant distance with respect to a target—for example a human face—even when the target is moving.

“I can envisage many applications for this invention,” says Zhang. “Including systems for producing 3D images for 3D television, and even automated driving of cars, where the movement of the car would be controlled by the robot-eyes, and not the human driver.”

Zhang has set up a venture company, Bi2-Vision Ltd and working with the Office of Industry Liaison of Tokyo Tech to commercialize his invention. 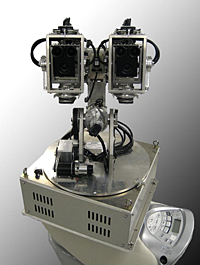