Many branches of science depend on the notion that some quantities, for example the mass and charge of fundamental particles, remain exactly the same under all possible conditions. In solid state physics, however, such constant quantities are more elusive because the theories describe very complex systems of interacting particles.

Even so, there are a few well-known cases in which large numbers of particles act in a way that causes some precise behaviour on the macroscopic scale of the system. For example the magnetic flux within superconductors is measured in precise blocks - or quanta - of hc/2e, where h is Planck’s constant, c is the speed of light, and e is the charge of an electron.

Now, Takao Sasagawa and Kyushiro Igarashi from the Materials and Structures Laboratory at Tokyo Institute of Technology have worked in collaboration with scientists at Stanford University in the US and researchers at RIKEN in Japan to verify another precise system called a topological insulator [1,2].

In one of their papers [1], published in the prestigious journal Science, the researchers state that “topological insulators are a state of matter that may serve as a platform for (investigating) both fundamental physics phenomena and technological applications, such as spintronics and quantum information processing.”

The reason that many solids are insulators is that they possess an energy gap between their occupied and empty electronic states. Some insulators have different states on their surface that allow the crystal surface to conduct electricity like a two-dimensional metal, but these gapless surface states are usually very fragile and will break down if the surface is damaged.

Several topological insulators have recently been identified, including dibismuth triselenide (Bi2Se3) which possesses a surface electronic state called a single Dirac cone. The Tokyo-Tech/Stanford international research team performed angle-resolved photoemission spectroscopy (ARPES) to examine the electronic structure of Bi2Se3 before and after doping it with magnetic impurities [1]. They showed that the doping in the bulk crystal caused the gapless surface states to become gapped – making the crystal an insulator again (Fig. 1).

The experiment is the first to confirm the theory that conducting surface states will break down when magnetism is introduced to a topological insulator. More interestingly, when the gap is reopened the Bi2Se3 crystal becomes no ordinary insulator – it is a so-called ‘quantum Hall insulator’ and is predicted to have an exact value of Hall conductance equal to e2/2h. Note that this quantized conductance is the half of the value observed in the quantum Hall effect in conventional two-dimensional metals, and is expected to appear in the absence of an external magnetic field.

Another remarkable aspect of the unusual surface electronic states in topological insulators manifests itself as their quantized energy levels in an external magnetic field. The Tokyo-Tech/RIKEN research team utilized a scanning tunneling microscopy / spectroscopy (STM/STS) technique in a magnetic field to verify the existence of the zeroth Landau energy level in Bi2Se3 (Fig. 2) [2], which is closely related to the unconventional half-integer quantum Hall effect.

These two experimental observations have established that the surfaces of the topological insulators could join the growing list of solid state systems that show notable form of exact quantization. These results may provide basis for understanding topological insulators as well as open several new avenues for technological exploitation. 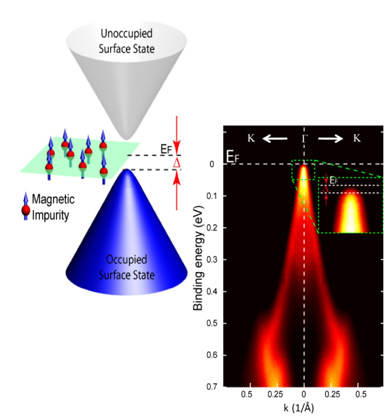 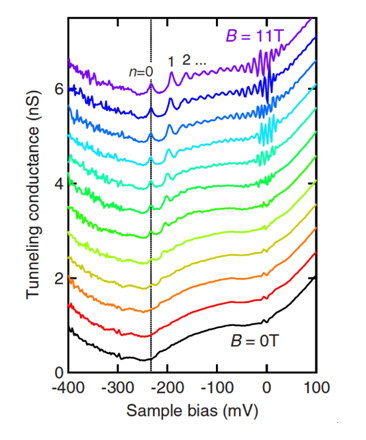