We have recently shown that poly(TPEN)–NIPA gel effectively extracts soft metal ions such as CdII and f-block metals such as minor actinides from high-level radioactive waste.

Derivatives of TPEN that bear four polymerizable double bonds in the substituent on the pyridine ring have been used as a crosslinker in poly-NIPA gel. However, the optimum structure of the substituent of TPEN is poorly understood.

Yusuke Inaba, Kenji Takeshita at the Research Laboratory for Nuclear Reactors, Tokyo Institute of Technology, and Atsunori Mori and colleagues at the Department of Chemical Science and Engineering, Kobe University have synthesized novel TPEN derivatives and poly(TPEN-NIPA)gels. These gels have been used for the extraction of CdII ions to examine the relationship between gel characteristics and extraction performance.

The temperature-dependent CdII extraction behavior of poly(TPEN-NIPA) gels was examined in the swelling state (5°C) and in the shrinking state (45°C) at pH values of around 2.0 and 6.5.

The high performance of one of the gels, C3b, is noteworthy. It was found to form the strongest gel, probably because of the improved reactivity brought about by the introduction of an electron-donating methyl substituent into the double bond.

These gels could potentially be applied to the separation of minor actinides from high-level radioactive wastes. 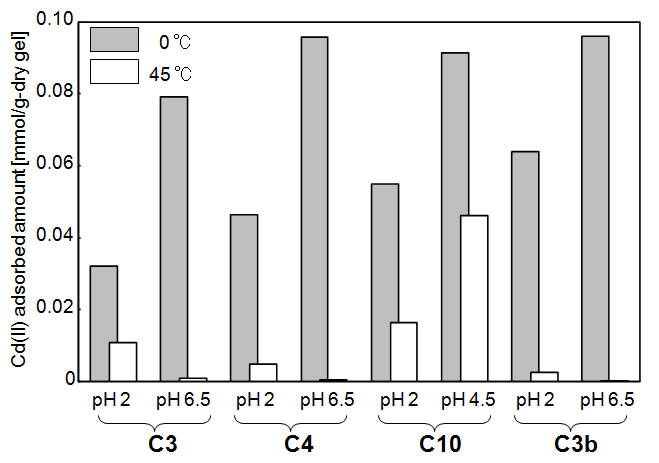