Dynamic loading of fluid-filled tubes created by valve actuation is a well-known problem in power and processing plants. The change in fluid momentum is widely referred to as water hammer.

An elaborate theory of water hammer was first given by Skalak. The linear theory predicts that an impact will generate two waves; the primary wave will carry the main disturbance, accompanied by a precursor wave that has a much smaller amplitude of disturbance.

The researchers carried out tests in a unique facility using a gas gun mounted vertically above a tube filled with water. A projectile was accelerated, which then struck the water surface generating stress waves.

Comparison of their measurements with the theory indicates reasonable agreement between the predicted and measured peak strains as a function of the impact speed. However, they also found that the primary and precursor wave speeds were independent of the speed of impact.

The studies could find applications in damage reduction systems, where the precursor wave is monitored before the primary wave arrives. 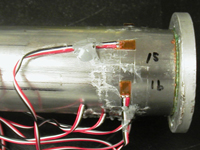 A bulge near the closed-end bottom created by reflection of the stress wave.