Quantum information processing is attractive for performing efficient algorithms that can’t be run on ordinary computers, and demonstrating new phenomena with intriguing non-classical characteristics. This technology relies on coherent manipulation of quantum bits, or qubits, which have been demonstrated in various materials.

Now, Toshimasa Fujisawa and colleagues at NTT Basic Research Laboratories and Tokyo Institute of Technology have demonstrated that some important two-qubit manipulations (called for example CNOT and SWAP) can be performed in an integrated device made with semiconductor quantum dots.

In their device, two double quantum-dots, each working as a charge qubit, are driven by a high-speed voltage pulse to induce coherent electronic motion based on quantum mechanics. To make this work, the researchers carried out their experiment at an extremely low temperature of about 0.1 K. 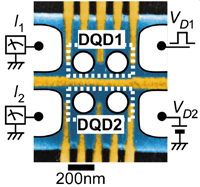