Precise knowledge of the rigid body properties of structures such as aircraft wing, automobiles, bridges, and ships is critical for eliminating adverse vibration and stress, as well as the safe operation these types of machines and structures.

However, the complicated shapes and nature of these structures leads to inherent challenges in devising simple methods for accurately determining properties such as the center of mass, and the body's resistance to angular acceleration; the so-called moment of inertia.
Currently, these properties are measured by methods including the ‘pendulum’ and ‘force/motion’ methods, which have severe limitations because they require strong actuators, high performance sensors, and friction biases.

With this background, Robert Kloepper and Masaaki Okuma set up Resonic GmbH in 2011 providing a simple, inexpensive, and highly adaptable approach for determining the rigid body properties of structures ranging from small meter sized hollow cuboids to even massive parts of modern airplanes.

Intriguingly, Dr Kloepper obtained Ph.D in September 2009 from Tokyo Institute of Technology and extended his stay for research as a post-doc in professor Okuma’s group until the end of 2010. During the stay he planned and made preparations to launch the company. Then, after returning to his native Germany in January 2011 he opened an office in Berlin together with three like-minded entrepreneurs with financial support from the Technology Venture Initiative at TU Berlin.

In the Resonic method (Fig.1) all the rigid body inertia properties are measured by suspending the test structure on an elastic wire and setting into oscillation or ‘exciting’ by means of simple vibratory actuation. Notably, the Resonic method monitors only the natural frequencies of the system that is excited into free vibration. Furthermore, the suspension model prevents errors that could otherwise arise due to suspension and gravity effects.

This method was successfully used to determine the rigid body properties of an assembled motorcycle frame and engine. 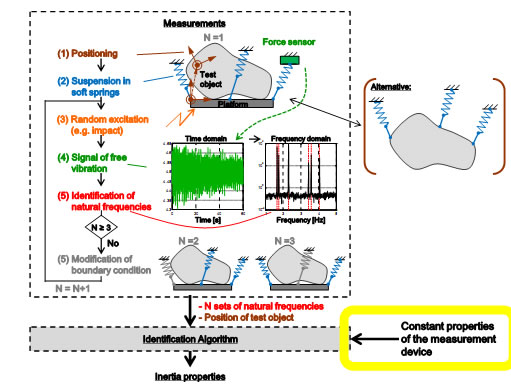