A growing area of geosciences research focuses on the interactions between different liquids and minerals present on Earth. The presence of water, for example, can have a profound effect on erosion, mineral composition, and the frictional strength of fault lines on which earthquakes occur. For this reason, researchers strive to understanding the physical and chemical properties of interfaces where water or saltwater is in contact with rocks and minerals, and how they might affect fault line dynamics.

Considerable work in this area has been carried out by Hiroshi Sakuma at the Tokyo Institute of Technology, with colleagues spanning several different disciplines from a number of institutions in Japan, including Tohoku University in Sendai and Ochanomizu University in Tokyo. Over the past 5 years, Sakuma and his team have investigated many aspects of the interactions between water, salt solutions, and mica – a mineral rock formation frequently found in faultlines all over the globe.

“Mica has a crystal structure representative of many other clay minerals,” explains Sakuma. “Clay minerals including mica are often in contact with saltwater in creep fault zones, for example the San Andreas fault in California.”

Initially, Sakuma and colleagues studied the physical properties of saltwater confined between mica surfaces1. They used shear resonance measurements to show that the water, when squeezed into a tiny crack thinner than a couple of nanometers, became more viscous, thereby enhancing the lubrication between the mica layers.

Sakuma’s team then went on to investigate the influence of ions of different elements when mixed with water molecules on mica surfaces2. Lithium, sodium, potassium, caesium, and hydronium ions were analysed using molecular dynamics simulations. Sodium ions proved to be the most effective at bonding with the mica surfaces. The ions maintain layers of water molecules around them, thereby enhancing the lubricity between mica sheets.

These results prompted Sakuma to investigate further the processes involved between sodium ions, water molecules, and mica. In their newest published research, Sakuma, together with colleagues from Ochanomizu University, the High Energy Accelerator Research Organisation in Ibaraki, and Nippon Sheet Glass Company in Hyogo, analysed the complete structure of hydrated sodium ions and water molecules on mica surfaces3.

The researchers used X-ray surface scattering in combination with molecular dynamics simulations. Sakuma explains: “X-ray surface scattering measurements are powerful tools to reveal the electron density of solid-liquid interfaces. However it is difficult to reveal the atomic-species distribution of the interfaces. Our method, combining the X-ray measurements with simulations, provides precise information about the distribution of atomic species at the interface, with sub-angstrom resolution.”

The results revealed how the sodium ions, once bonded with opposite facing mica surfaces, form a ‘bubble’ or ‘shell’ of water molecules around them. This structure then acts rather like a ball-bearing covered in oil, thereby lessening the friction between the two mica surfaces should they start to move against each other. Sakuma explains: “We found that the water in the first hydration shell of the adsorbed sodium ions on a mica surface shows high lubricity. This implies that the low frictional strength of the layered clay minerals is due to this lubrication.”

The results suggest that a clay rich, water-filled fault in an earthquake zone could move without much friction, meaning the chance of a devastating earthquake is much reduced. This research is, however, still very much at fundamental physics level, meaning that no direct application can be made as yet in effective earthquake disaster management.

Sakuma hopes to further deepen understanding of water-salt-mica interfaces in future by investigating “the structure of the interface at high pressure and temperature, corresponding to the conditions of actual creep faults.” 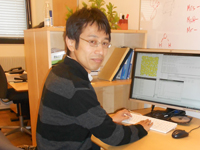 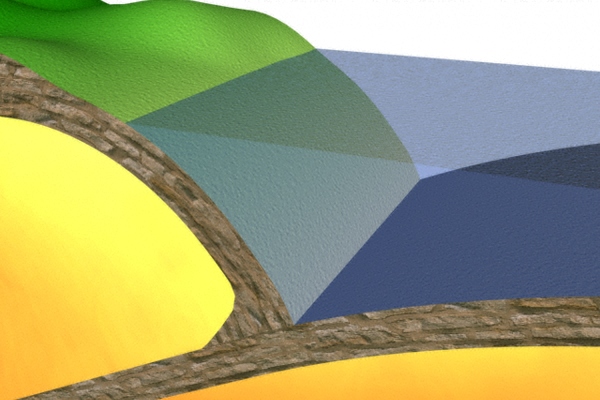 Side view of the isodensity surface of water molecules around Na+ ions adsorbed on a mica surface calculated by molecular dynamics simulations.

ESchematic illustration of the NaCl solution confined between mica surfaces. The water molecules in the first hydration shell of the Na+ ions act similar to ball-bearings.