Thalidomide: a pathway round the side effects

A protein that plays a key role in the development of birth defects associated with the use of thalidomide has been identified by researchers at Tokyo Tech with the use of recently developed sub-micrometer magnetic beads [1].

Thalidomide was prescribed as a sedative for pregnant women to treat morning sickness in the late 1950s. It was removed from the market in the early 1960s, when its use was linked to birth defects including shortened or absent limbs, as well as ear, cardiac and gastrointestinal malformations. However, within a few years the powerful pain relief properties of thalidomide for leprosy patients suggested that the drug may yet have medical benefits. In the 1990s it was also proven to be effective in the treatment of the cancer multiple myeloma.

It is still little understood how use of thalidomide leads to the development of birth defects, and tight restrictions are maintained over administration of the drug to treat leprosy and cancer. Insights into the mechanism behind the toxic effects of thalidomide on pregnant women could help to find ways to avoid these side effects and release the potential of the drug as a powerful medical aid.

Researchers at Tokyo Tech have recently reported the development of high-performance affinity beads – magnetic beads 200 nm in diameter that can be attached to drugs and other compounds, allowing one-step affinity purification of drug targets and an insight into how the drugs act [2]. As Hiroshi Handa and his colleagues explain, “Currently, most commercially available drugs and physiologically active substances have been brought to market without knowledge of factors interacting with the drugs and the substances.” Handa have now applied the beads to unravelling the mystery behind the birth defects caused by thalidomide [1].

The researchers used ferrite glycidyl methacrylate beads for purity affiliation of thalidomide, and identified cereblon as a protein that binds directly with the drug. The researchers then performed in vivo experiments in zebrafish, which were recently shown to be affected by thalidomide during embryonic development and have the useful attribute of a transparent embryo so that the progress of development can be conveniently monitored. Knockdown of genes of interest is also easily implemented in zebrafish. Thalidomide treatment was found to noticeably affect the development of the pectoral fins and otic vesicles, which it is suggested, share common molecular pathways with that of developing limbs and ears in tetrapods.

Zebrafish have a gene that is orthologously similar to cereblon in humans. The researchers investigated the development of embryos in which this gene was knocked down and similar defects were observed as for embryos treated with thalidomide. Co-injection of messenger RNA for the cereblon-orthologous gene was found to rescue these defects. The results suggest a potential means to reverse the developmental problems caused by thalidomide treatment.

The action of thalidomide is complex and it is associated with a number of other mechanisms that may also cause problems in fetal development, including oxidative stress and antiangiogenic activity. However, as Handa and his colleagues explain, “identification of thalidomide’s direct target may allow rational design of more effective thalidomide derivatives without teratogenic activity”. The work holds promise for a role of thalidomide in medical treatment that is not blighted by the side effects observed in the past. 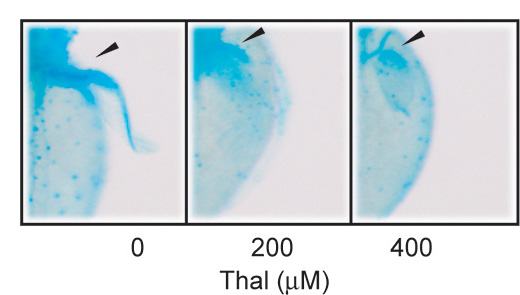 Thalidomide treatment or downregulation of the CRBN complex causes developmental defects in zebrafish.