When a fluid is raised above particular levels of pressure and temperature, it may enter the so-called supercritical region – a state that combines many of the properties of liquids and gases. Engineers have long known that these supercritical fluids could be used in a traditional steam-type cycle to vastly improve the efficiency of turbine generators. For example, much attention has focused on the use of supercritical water for nuclear power reactors, but the development of working systems has faced many technical hurdles.

Now, Motoaki Utamura from Tokyo Institute of Technology and Hiroshi Hasuike from the Institute of Applied Energy have demonstrated the first working turbine generator based on a power cycle of supercritical carbon dioxide1.

Carbon dioxide has particular appeal as a working fluid because its critical point is 304 K, very close to room temperature. This means that an efficient turbine cycle could be driven by a relatively low temperature heat source, for example the waste heat from industry or renewable energy plants. In fact, the carbon dioxide power cycle was first studied in the 1960s2, but was soon dismissed as being too expensive to be viable.

In more recent years, thanks to the availability of new materials and techniques such as high-performance heat transfer surfaces, the concept has seen a revival, with test facilities being built in some countries3. To date, however, no one has achieved power generation coupled with turbines.

One of the problems of operating at quite low temperatures is that there may be phase changes in the fluid at different points in the cycle. Utamura and Hasuike realized that crucial energy savings could be made by redesigning the compressor, because it takes far less energy to compress a supercritical fluid than the theoretical ideal gas4. They decided to operate at an increased pressure to maintain the supercritical state everywhere in the system, and avoid any phase changes. This approach has the added benefit of providing a higher energy density, so that smaller components can be used for power generation in more compact applications such as cars.

The researchers built a small bench-scale generator5 in which supercritical carbon dioxide is compressed, heated, expanded and cooled in a cycle that lasts approximately 18 seconds. They also showed how to maximize the power output by designing the compressor to work near the critical point at room temperature, and the turbine to work at higher temperatures around 550 K where the fluid behaves more like an ideal gas. Due to some mechanical and electrical losses in the machinery, the system currently requires as much mechanical energy input as it gives out (18 kilowatts), but all these contributing losses would be considerably reduced on scaling up to a larger, more practical scale.

As the researchers say in their most recent paper6: “Generally speaking the present experiment shows that precise control of thermodynamic state of working fluid near the critical point would create a substantial increase in thermal cycle efficiency.” 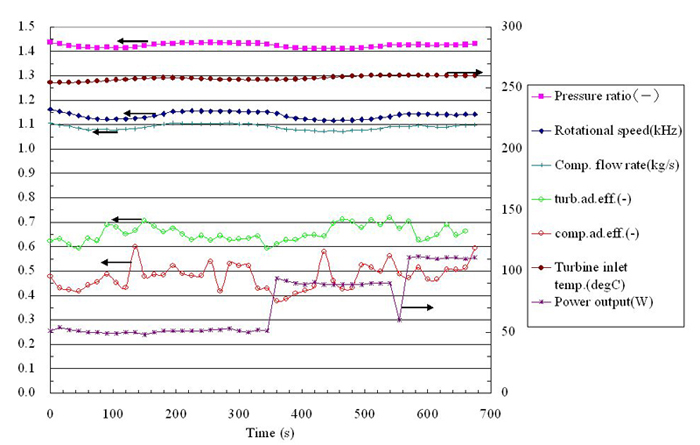