Tokyo Tech 'swumanoid' may find applications in enhancing the performance of competitive swimmers and streamlining swimsuits.
Chung Changhyun and Motomu Nakashima at Tokyo Institute of Technology (Tokyo Tech) developed the half-scale swimming robot by carefully analyzing the bodies of swimmers. The 'swumanoid' incorporates 20 water proof motors, which are computer controlled to mimic the action of actual human swimmers.

To-date research on swimming has relied on monitoring the actual human swimmers, which leads to fundamental problems related to reproducibility of swimming movements. In contrast the ‘swumanoid’ enables the control of precise movements and driving forces of the robot-swimmer. The researchers say that, “in the future, we want to develop methods for producing much faster ‘swumanoids’ and analyze their movements for the development of high speed swim wear.”

These results will be presented in Taipei at “The Fifth International Symposium on Aero Aqua Bio-Mechanisms” , 25–28 August 2012.

The physical mechanisms governing the movement of swimmers are unclear. Nakashima and colleagues at Tokyo Tech have previously reported on the swimming human simulation model SWUM (SWimming hUman Model) for analysis of whole body dynamics in swimmers [1, 2].

Increasing the driving force due to hands and feet and reducing body resistance to movement through water are two of major issues to resolve. Conventional research has focused on analysis of video images of actual swimmers. However, this approach depends on the ability of swimmers to be able to reproduce their movements as well as making accurate measurements of the forces acting on mobile swimmers during the experiments—both extremely difficult tasks. Here, the humanoid robot developed by Chung Changhyun and Motomu Nakashima is half the size of a human but with the same body proportions and features.

12 motors actuate the movement of the upper limbs and one motor moves the waist. Furthermore, each arm had six degrees of freedom; the shoulder has four; and the elbow two. Notably, additional joints installed in the shoulder reproduce scapular retraction. The potential of the Tokyo Tech‘swumanoid’ was demonstrated the realization of the front crawl arm motion—the most complicated of the four swimming strokes. 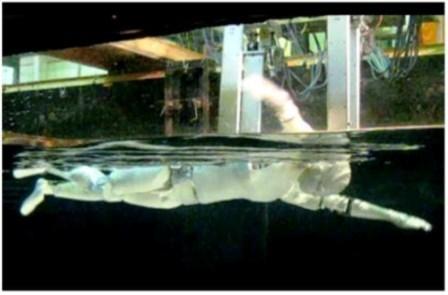 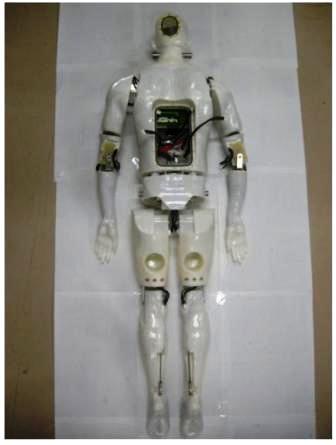 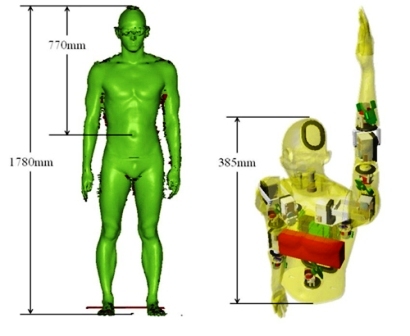