Michito Yoshizawa, Zhiou Li, and collaborators at Tokyo Institute of Technology synthesized ~1 nanometer-sized molecular capsules with an isolated cavity using green and inexpensive zinc and copper ions. In sharp contrast to previous molecular capsules and cages composed of precious metal ions such as palladium and platinum, these nanocapsules emit blue fluorescence with 80% efficiency.

Molecular nanocapsules have potential applications as photo-functional compounds and materials but so far molecular capsules synthesized by incorporating palladium ions and so on exhibit poor fluorescence. The researchers expect to be able to prepare multicolor fluorescence composites by the simple insertion of appropriate fluorescent molecules into the isolated cavity of the nanocapsules.

Fluorescence has widespread applications, helping researchers to understand issues in the fundamental sciences and develop practical materials and devices. Among the useful fluorescent compounds in development, capsule-shaped molecular architectures, which possess both strong fluorescent properties and a nanometer-sized cavity, are particularly promising.

Molecular cages and capsules can be prepared through a simple synthetic process called coordinative self-assembly. However, most of them are composed of precious metal ions such as palladium and platinum, and are non-emissive due to quenching by the heavy metals.

The M2L4 capsules self-assemble from two metal ions and four bent ligands that include anthracene fluorophores (fluorescent parts). X-ray crystallographic analysis verified the closed shell structures where the large interior cavities of the capsules, around one nanometer in diameter, are shielded by eight anthracene panels.

The zinc capsule emitted strong blue fluorescence with a high quantum yield (80%), in sharp contrast to the weakly emissive nickel and manganese capsules and the non-emissive palladium, platinum, and cobalt capsules. The fluorescence of the copper capsule, on the other hand, depends on the solvent; for example, it shows blue emission in dimethyl sulfoxide but no emission in acetonitrile.

This study is the first to show such emissive properties of molecular capsules bearing an isolated large cavity. The researchers believe their nanocapsules could have novel applications in devices such as chemosensors, biological probes, and light-emitting diodes. 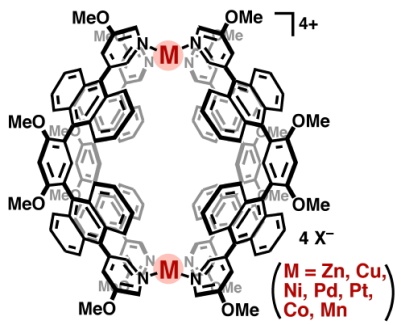 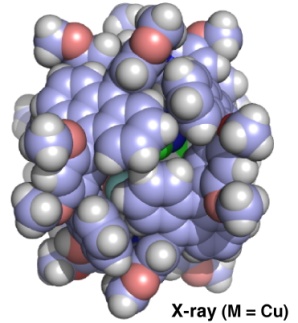 Crystal structure of the copper capsule 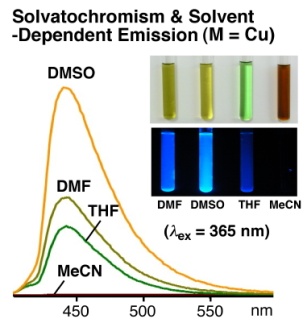 Fluorescent properties of the copper capsule