Multiple-input multiple-output (MIMO) is a smart technology for radio communications that involves using multiple antennas to improve performance. MIMO has attracted much attention for mobile devices because it can increase system capacity and data transfer rate without the need to expand frequency bands or increase power supply.

To detect signals accurately, MIMO requires advanced processing algorithms. At present, the best algorithm is maximum likelihood detection (MLD), which achieves the lowest bit error rate (BER). However, for complex systems with a large number of transmitting antennas, the MLD calculations are highly computationally demanding, making them difficult to implement quickly. For this reason, researchers have been striving to develop suboptimal detection algorithms that can reduce the complexity of calculations while maintaining almost the same BER performance as MLD.

Liming Zheng and colleagues at Tokyo Institute of Technology's Department of Communications and Integrated Systems propose a new, low-complexity signal detection algorithm. Their algorithm works by calculating the expected errors in signal detection, then performing a multi-dimensional search for signal candidates among the various levels of noise enhancement from which the overall signal suffers.

The researchers performed computer simulations under MIMO channel conditions in order to verify the effectiveness of their algorithm. They found that the algorithm could achieve almost the same BER performance as MLD while drastically reducing the complexity.

Zheng and co-workers hope that their low-complexity algorithm could easily be implemented in hardware, bringing faster, higher density data transfer to mobile communications without the need for extra computation and power. 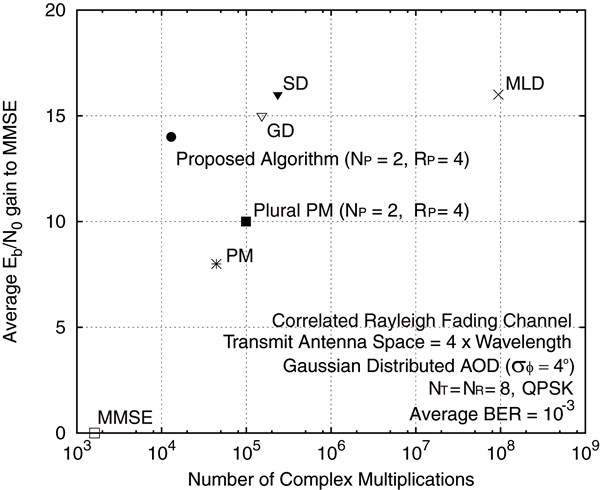 Trade-off between BER Performance and Complexity