Many organic solid-state materials are environmentally responsive, meaning that they can rapidly change their structure depending on the atmosphere around them. Thus, the specific properties of the material can be controlled simply by changing the surrounding air and light conditions. For example ‘photochromic’ materials are substances that change color when they are exposed to light.

Some other materials can undergo a reversible color change in the air when they make contact with water vapor or other volatile compound vapor. This is the phenomenon of called ‘vapochromism’. The underlying cause of the color change, whether induced by light or by vapor, is usually associated with changes at the molecular or structural level. The structural understanding of such changes are best achieved when the materials are crystalline, and of acceptable size and quality for single crystal X-ray diffraction analysis. However, the actual processes which lead to photochromism or vapochromism often degenerate crystals to powder, which are unsuitable for traditional X-ray analysis. Therefore, a very important research target in the field of materials science is to determine structural changes of powdery materials.

The researchers used high-resolution synchrotron radiation diffraction to study powders under different water vapor conditions, and also applied a modern ‘heuristic real space’ structure analysis method to understand the structural changes that were occurring. By combining the results from the experiments and theory, the team established several types of vapor-induced solid-state transformation processes that produce a three-dimensional structural change in the material.

The study covered several different materials, and the researchers analyzed their transformation mechanisms. In one study, they found that acrinol, a compound of pharmaceutical interest, was transformed by changes in water vapor pressure to a novel crystalline form that has a dissolution rate eight times faster than the original form.

The researchers also characterized a very simple organic compound, 5-aminoisophthalic acid, which exhibits vapochromism when exposed to organic vapor; a pale pink hydrate phase turns to a yellow anhydrous phase. This change was shown to be reversible, and is associated with proton transfer in the molecules. The characterization of this phenomenon gives an insight into the color changing mechanisms of organic materials such as plant and flower pigments.

Vapor application is a very simple and mild process for environmentally responsive materials, but as shown by this study it can lead to dramatic changes in the solid-state properties. Thus, further research into vapor power could expand the potential of solid-state materials in the future. 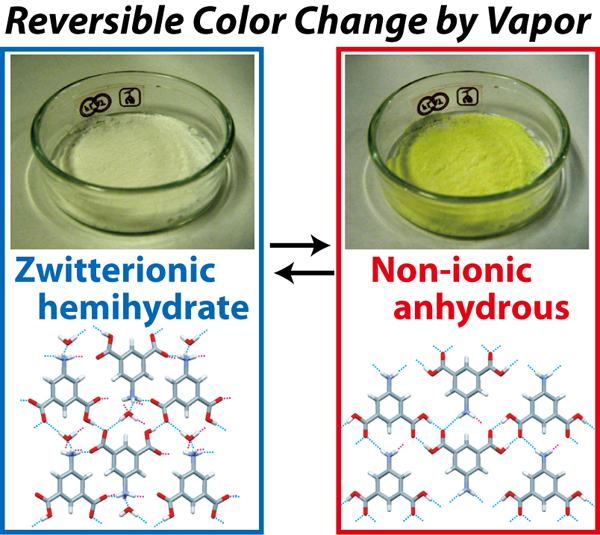