We performed angular-resolved polarized SERS spectroscopy (AP-SERS) to probe the adsorption structure of molecules on surface-immobilized gold nanospheres, after developing a theoretical analysis for AP-SERS. It was found that the molecules are adsorbed only in the upper hemisphere region of the gold nanospheres at high nanosphere density. This is because the solution does not intrude into the space between the nanospheres, as a result of the surface tension of ethanol. This is similar to the fact that the lotus leaf repels water because of the roughness of its leaf surface.

Surface enhanced Raman scattering (SERS) spectroscopy is a powerful optical tool for probing organic and biological molecules and pathogens.  The greatly enhanced local electric fields generated at a rough surface or at colloidal metals is the main cause of the great enhancement of the Raman scattering signal.   The large enhancement of the electric field is due to localized surface plasmons (LSP) in the nanometer-scale metallic structures.   SERS makes it possible to detect very small numbers of molecules even down to single molecular level.

We studied how the molecules are adsorbed on the SIGN, using angular-resolved polarized SERS (AP-SERS) spectroscopy.  Although polarized SERS spectroscopy is powerful for detailed probing of molecules adsorbed on a metallic surface, few studies have used it.  This is because the structures of most SERS-active platforms are complicated, and it is difficult to analyze the SERS signal.  As a model system, we used surface-immobilized gold nanospheres (SIGN) on a gold substrate (Figure 1(a)), and developed a rigorous theoretical analysis for the AP-SERS signal from the platform.  We measured ratios η of SERS signal intensity at different polarization intensity, at different angle of incidence (Figure 1(b)).  The profile was compared with the simulation on the basis of the theory that we have developed.  The simulation was made by changing the cap angle θcap that is a polar angle that the monomolecular layer covers (Figure 1(a)).  As a result, we found that the molecules are adsorbed only in the upper hemispherical regions, i.e. low cover angle, in the high density SIGN structure (Figure 2(b)), whereas in low density SIGN structure (Figure 2(a)), the molecules are adsorbed in both upper and lower regions θcap ~ 170º.  This means that the ethanol solution involving the SERS-active molecules does not intrude into the space between the nanospheres, when immersion of the substrate in the solution, as shown in Figure 3(a). This is similar to the fact that the lotus leaf repels water (Figure 3(b)), because of the surface roughness of the lotus leaf (Figure 3(c)). 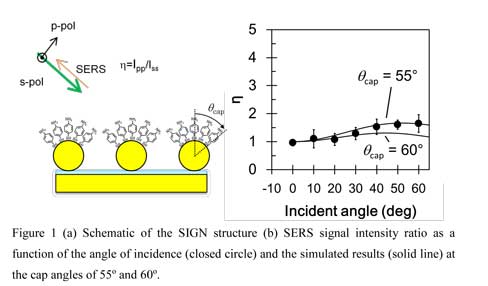