President Mishima Receives Courtesy Call from the President of CONICYT

The topics discussed included the current state of Chilean students studying overseas, the Chilean scholarship system and the funding mechanisms for research programs implemented by CONICYT. Additionally, Chile’s international academic exchanges in astronomy were explained. The delegates emphasized that they hope to encourage Chilean students to study abroad, especially at science and technology universities in Asia. To this end, there was an enthusiastic exchange of questions and answers about a framework for promoting Chilean students to study at Tokyo Tech.

The meeting was also attended by Professor Saburoh Midorikawa, Department of Built Environment, Interdisciplinary Graduate School of Science and Engineering, who was a visiting professor at Pontificia Universidad Catolica de Chile (PUC), and has dedicated many years to international cooperation with Chilean scientists. The meeting concluded in a friendly atmosphere. 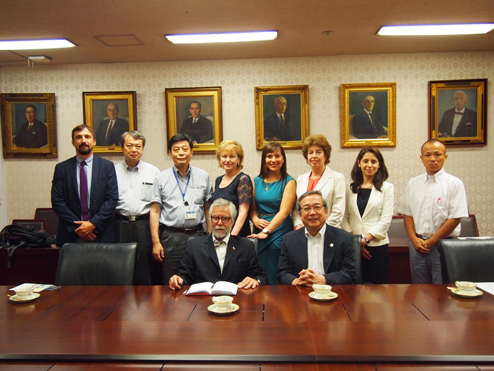