The sculpted channels of the Martian southern hemisphere speak loudly of flowing water, but this terrain is ancient. Consequently, planetary scientists often describe early Mars as 'warm and wet' and current Mars as 'cold and dry.'

However, despite its crucial role in biological and geological processes, information about water on Mars is still controversial.

Tomohiro Usui and his collaborators at NASA's Johnson Space Center and Carnegie Institute of Washington report on geochemical studies that help towards settling the controversy that surrounds the origin, abundance, and history of water on Mars.

The team reveals the micro-distribution of hydrogen isotopes recorded in Martian meteorites; hydrogen is the major component of water and it isotopes (H and Deuterium) are good indicators to trace the history of water.

They report definitive evidence that the Martian mantle has retained a primordial hydrogen isotope composition similar to water on Earth but distinct from the water in the present Martian atmosphere (Fig. 1).

These observations suggest that Mars and Earth should have similar water sources probably originated from the Main-belt asteroids, and that Mars should have experienced significant atmospheric loss through the history, which induced the climate change from 'warm and wet' to 'cold and dry'. 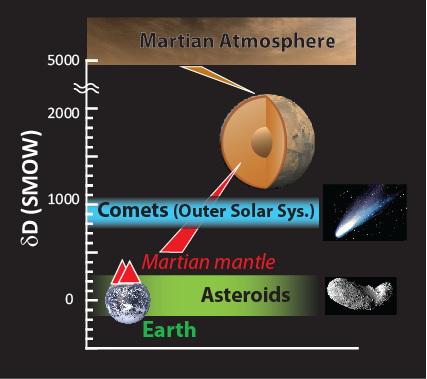