The Buffaloes, the American football club at Tokyo Institute of Technology (Tokyo Tech), was promoted to the Kanto League Division I, which is the major college football league in East Japan. The team fulfilled a dream it had cherished since its foundation.

The Buffaloes finished up the 2013 season in the B Conference of the Kanto League Division II, by winning the championship with 6 wins and 1 defeat. On Sunday, December 8 the team competed against Kanto Gakuin University's Hurricanes at Amino Vital Field in a promotion-relegation playoff game. 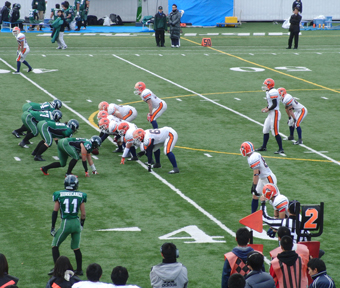 The Hurricanes then tied the score with a touchdown pass. If the game would have ended here, in a draw, the Buffaloes would not have been promoted to Division 1.

After taking the field, the Buffaloes' offensive team scored a touchdown within several running plays, regaining the lead, 21 to 14.

With time running out, Kanto Gakuin University's Hurricanes tried their luck and threw a long pass in an attempt at another touchdown. It was an electric moment; the thin line between triumph and defeat was palpable. A successful pass by the Hurricanes would have meant defeat for the Buffaloes.

As the audience watched the pass with bated breath, the Buffaloes adroitly intercepted it.

The Buffaloes' adviser, Associate Professor Kazuhiro Suda of the Department of Human System Science in the Graduate School of Decision Science and Technology, commented, “It was the Buffaloes' third attempt in a promotion-relegation game, and they finally made it. The Buffaloes will play in the Kanto League Division I in the 2014 season. Please join them at the field to cheer them on.”