On October 30, 2013, Dr. August Hergesheimer, founder and CEO of Abios Co., Ltd. and founder/chairperson of the Save Minamisoma Project, gave a lecture in English titled “Starting Business and Engaging in Volunteer Activities in Japan.” The lecture was sponsored by the Tokyo Tech Creativity Education Fund as part of the Topics on Japan undergraduate course. Of the 75 students present, three quarters were international students. Faculty and staff members of Tokyo Tech, media representatives, and Mr. Hatsuhisa Takashima, former chief commentator at NHK and president and CEO of Japan International Broadcasting Inc., were also in attendance. 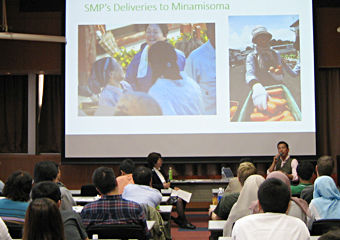 Dr. Hergesheimer was born in 1962 in Inawashiro, Fukushima to an American father and Japanese mother. He grew up in Yokohama and San Diego. Dr. Hergesheimer became interested in anti-ageing when he was a medical student at San Diego State University and earned his Ph.D. in nutritional science. He returned to Japan to help with his father's business, selling US-manufactured vacuum cleaners. After working in a number of other businesses, he founded Abios in 1990, a company specializing in the formulation, manufacture and sale of whole foods products. In tandem with Abios, Dr. Hergesheimer founded the Save Minamisoma Project soon after the 2011 Tohoku earthquake. The volunteer organization has made more than 50 deliveries of fresh food, safe drinking water, and other relief supplies to the people of Minamisoma, Fukushima. 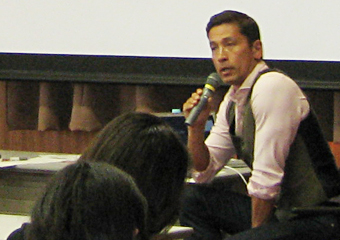 Dr. August Hergesheimer during his lecture

Dr. Hergesheimer launched the Save Minamisoma Project after seeing an interview with an older woman forced to take shelter in an evacuation center in Minamisona due to the earthquake, tsunami and radiation from the Fukushima Daiichi Nuclear Power Plant. The interview triggered his visit to Minamisoma where he learned that even though relief supplies were delivered to the evacuation centers, further distribution to local residents was delayed. In response, Dr. Hergesheimer gained the cooperation of his friends and started the volunteer project to deliver necessary goods directly to the residents.

Minamisoma is located within the 20 km Restricted Area and the 20-30 km Deliberate Evacuation Area surrounding the Fukushima Daiichi Nuclear Power Plant. Although much of its population evacuated to other areas, more than 46,000 people, primarily senior citizens, still live in their homes or in temporary housing and are in need of safe drinking water and other supplies. 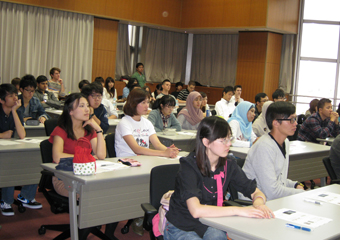 Funding for the Save Minamisoma Project is raised through regularly held charity events in Tokyo. Well-known jazz bands and other performers put on live shows for the project, which has also led to an increase in supporters and volunteers. In addition to regular deliveries of needed supplies, “well-built” volunteers from abroad dressed in Santa Claus outfits distributed presents on Christmas and volunteers in Halloween costumes delivered relief supplies in October.

Dr. Hergesheimer, father of five, business owner, and chairperson of the Save Minamisoma Project, has a hectic daily schedule. Asked how he deals with it, he answered, “When you are confronted with a problem, you have the choice to run away from it or stand firm and get it done. When life presents you with challenges, I believe you need to have a positive attitude to get things done.”

I was impressed that Dr. Hergesheimer has been supporting the disaster-stricken areas in spite of his busy schedule. He repeatedly mentioned having a positive attitude, and I will always keep that in mind in my student life. I am very thankful for his meaningful lecture.

Samuel Choukroun International Exchange Student from the University of Rennes

Dr. Hergesheimer has a lot of experience starting businesses in Japan and in other countries. It is, of course, important to know the business, market and legal environments, but the most important attribute to success as an entrepreneur is attitude.

Group photo after the lecture.
Dr. Hergesheimer is in the front row, fourth from right.