Researchers at Tokyo Institute of Technology reveal mechanisms for the formation of methane, which may have been a crucial stage in the origin of life on Earth.

Serpentinite-hosted hydrothermal systems have been suggested as likely sites for the formation of organic compounds in the abiotic conditions of early Earth, that is, in the absence of living organisms. “Such compounds were likely crucial for the chemical evolution of life,” explain Konomi Suda and colleagues at Tokyo Institute of Technology, Japan Agency of Marine-Earth Science and Technology and the Open University of Japan. Their latest research identifies mechanisms in the abiotic formation of the organic compound methane in serpentinite-hosted hydrothermal systems, a process that so far has not been satisfactorily understood.

The researchers compared water samples from a series of hot springs in the Shiroumadake area in Japan. Here due to recent volcanic activity they could study ongoing serpentinisation processes.

They measured the pH and temperature as well as the gas and ion content of the water samples in terms of both concentration and the ratio of different isotopes of the chemical constituents. Different isotopes of the same chemical differ in the number of neutrons in the nucleus. Each reaction yield characteristic isotope ratio because reaction rate of each isotopes are slightly different depending on processes.

Suda and colleagues found unexpected values for the ratio of different isotopes in the methane (CH4) and molecular hydrogen (H2) dissolved in the water, and the water itself (H2O) at the hot spring Hakuba Happo. In serpentinite-hosted hydrothermal systems methane was thought to form from synthesis with molecular hydrogen. However the researchers found that the ratio of different isotopes and chemicals could not be explained for this process in the temperature and pH conditions they had measured.

They conclude, “Based on a comparison of the hydrogen isotope systematics of our results with those of other serpentinite-hosted hydrothermal systems, we suggest that abiotic CH4 production directly from H2O (without mediation by H2) may be more common in serpentinite-hosted systems.” 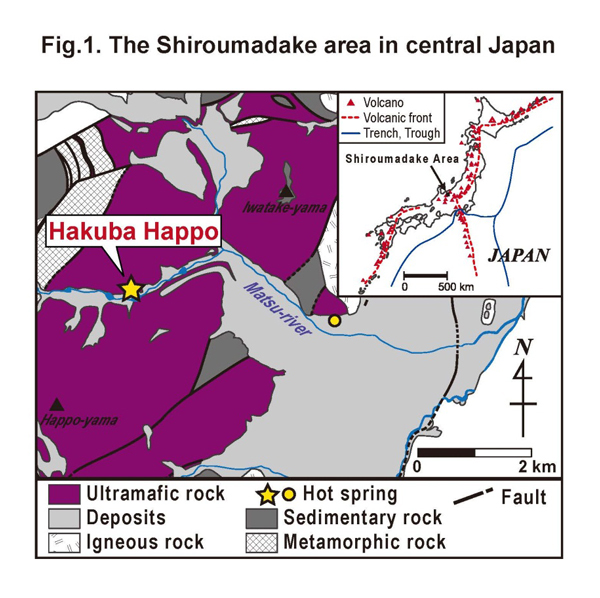