Absorbing sodium from fresh water in exchange with waste

A collaborative team from the Tokyo Institute of Technology and Mayo Clinic identified a Na+/NH4+ exchanger for the first time in the gill of freshwater fish and characterized its activity. Freshwater fishes absorb Na+ from low-salt environments from the gill. Approximately 70 years ago, Na+ was suggested to be absorbed in exchange with NH4+, however, the molecule that mediates the Na+/NH4+ exchange has not been identified. Here, we analyzed the function of a Na+/H+ exchanger (NHE3), which is expressed in the zebrafish gill, and found that NHE3 also acts as a Na+/NH4+ exchanger. This result indicated that freshwater fish use NHE3 as an energy saving system that mediates the exchange of NH4+ (waste) and Na+ (nutrient). This study will contribute to elucidate the mechanism by which teleost fishes adapt to freshwater. In humans, NHE3 is involved in the acid-waste system in the kidney. However, there is no good system that analyzes the NH4+-transport activity of human NHE3. Our results may provide clues for the analysis of the NH4+-transport activity of human NHE3. 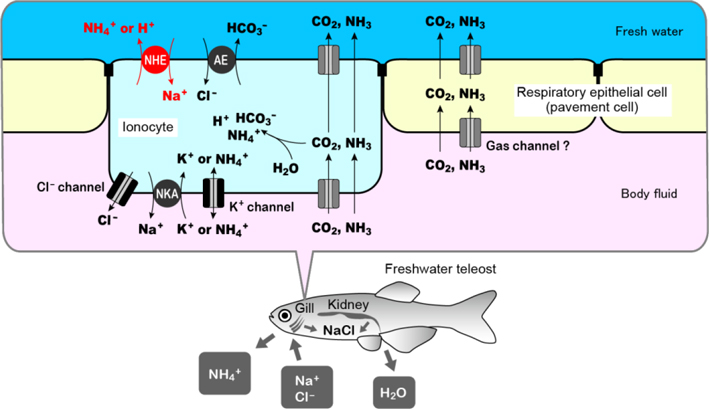 Fig. 1. Systems that absorb nutrient ions (Na+, Cl−) in exchange with wastes (NH4+, CO2) in the gill of freshwater fish. Red indicates the transporter whose activity was analyzed in the present study; the other molecules are from other reports. NH3 and CO2 are excreted directly through the lipid bilayer or gas channels, or they act as the driving force to absorb Na+ and Cl−. NH4+ is also considered to be absorbed by basolateral Na+/K+-ATPase and K+ channels. NHE, Na+/H+ exchanger 3; AE, anion exchanger; NKA, Na+/K+-ATPase.