On Tuesday, February 18, 2014, Tokyo Institute of Technology welcomed the music ambassador of partner university ETH Zurich, the ETH Big Band, to the Ookayama campus. Tokyo Tech and ETH Zurich have been partner universities since 1978, making the partner relationship with Tokyo Tech the longest for ETH Zurich. 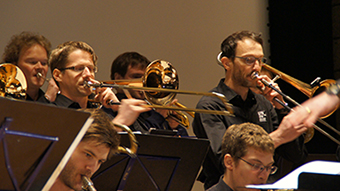 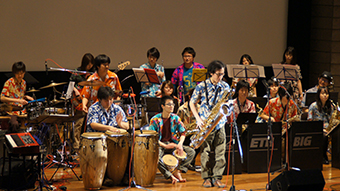 After a warm welcome by Tokyo Tech President Yoshinao Mishima, Mr. Anders Hagström, director of Global Educational Affairs at ETH Zurich, presented a brief slideshow overview of ETH Zurich pointing out the many similarities between the two universities, including a long history, the ratio of undergraduates to graduate students, and the fields of science and technology that they cover. Highlights of the Tokyo Tech - ETH Zurich relationship include a dozen faculty members from each of the universities engaged in collaborative research, short-term exchanges, and a scholarship program. Mr. Hagström extended a hearty welcome to Tokyo Tech students to visit Zurich.

Tokyo Tech's award-winning Latin music band, Los Guaracheros, performed a few opening pieces, engaging the audience and fans as they went along. Then the ETH Big Band took the stage and performed to the nearly full 70th Anniversary Auditorium which seats 400. Not only were students, faculty members and staff welcomed at the event, but members from the Swiss Embassy and the wider and local community were also present to hear the performance which was one of a series to commemorate the 150 years of diplomatic relations between Japan and Switzerland. The jazz and vocal performance by the ETH Big Band was enthusiastically received. The encore piece, a jazz rendition of Kojo no tsuki with vocals, was arranged by Henning Thomas, one of the trumpet players from the ETH Big Band.

After the concert, a cultural exchange lunch party was held for the ETH Big Band members and Tokyo Tech students. Tokyo Tech students who had studied at ETH Zurich were among the participants. The Swiss Embassy contributed cheese to this exchange event and demonstrated special cheese shaving techniques for Tête de Moine. Members of Los Guaracheros communicated with members of the ETH Big Band through the shared topic of music and instruments. Everyone appeared to be enjoying the opportunity for cultural exchange that this event provided. 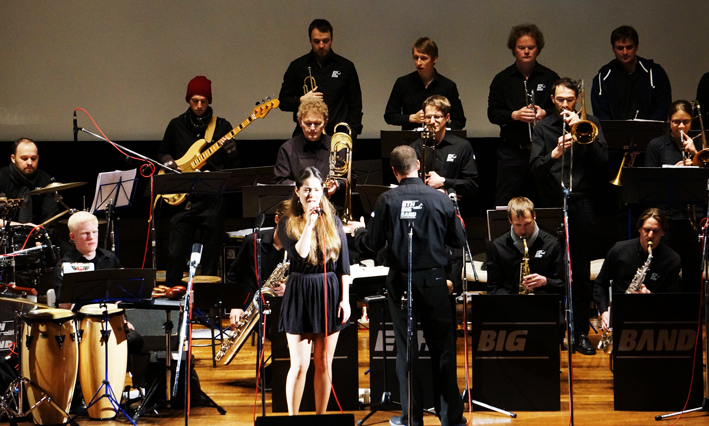