The 2nd Biotechnology and Bioscience International Symposium was held on January 29 in the Suzukake Hall at the Suzukake Campus. The symposium is jointly organized by the Graduate School of Bioscience and Biotechnology and the Educational Academy of Computational Life Sciences (ACLS), the latter of which is supported by a Ministry of Education, Culture, Sports, Science and Technology (MEXT) research fund in its Program for Leading Graduate Schools. This symposium series was inaugurated last year. For the second straight year, the Suzukake Hall was almost full to capacity with 273 participants this year, 263 from Tokyo Tech.

The Bioscience and Biotechnology International Symposium targets Tokyo Tech graduate students and post-doctoral students who conduct or are interested in bio-research. The symposium has three purposes. One is to provide young scientists with the opportunity to witness world-class science early on in their academic careers. Two is to provide a platform for learning about hot interdisciplinary topics, and three is to allow them to learn about various styles of research through the talks given by internationally acclaimed scientists.

The title of the 2nd symposium was “The Nucleic Acid World - Interfaces between Biology and Chemistry.” Today the field of nucleic acids is integrated into the different life sciences resulting in many interdisciplinary fields. Therefore this symposium presented a breadth of topics, including genes, RNA and genomes, from the unique perspectives of biology or chemistry. Five leading researchers from overseas and four world-renowned Tokyo Tech faculty members were invited to speak at the symposium. 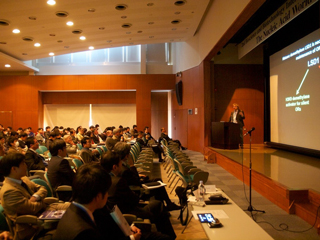 Professor Haruhiko Siomi from Keio University and Associate Professor Stavros Lomvardas from the University of California San Francisco introduced their research on the mechanisms of gene expression on a genome-wide scale. The existence of the mechanisms, which simultaneously regulate from a few to several tens of thousands of types of genes scattered throughout a genome, attracted participants in the field of bioscience and biotechnology as well as those in the field of information science.

Professor Byeang Hyean Kim from Pohang University of Science and Technology in Korea and Professor Mitsuo Sekine from the Graduate School of Bioscience and Biotechnology at Tokyo Tech presented their research on the application of nucleic derivatives to the development of drugs. Novel gene regulation strategies by rationally designed DNA recognition molecules were presented by Professor Hiroshi Sugiyama of Kyoto University. These presentations showed us the power of chemistry to pioneer new fields in nucleic acid research.

Associate Professor Knut Woltjen from Kyoto University introduced his research on genome engineering in living cells through cutting-edge techniques such as TALEN and CRISPR, presenting the potential of genome engineering-based regenerative medicine in the near future.

From Tokyo Tech, Professor Hiroshi Iwasaki in the Graduate School of Bioscience and Biotechnology presented his research on the molecular mechanisms of genetic homologous recombination. Associate Professor Hiroyuki Ogata from the ACLS delivered a talk on unprecedentedly long giant virus genomes. Additionally, Associate Professor Yuichi Hongoh in the Graduate School of Bioscience and Biotechnology spoke about his research into the principles of biological symbiosis by making excellent use of the advanced genome analytical method called single cell genomics. All of these talks were intellectually stimulating to the many young scientists present.

Thanks to this symposium, a couple of collaborations have already begun between invited speakers and Tokyo Tech faculty members. The symposium committee chair, Professor Mitsuo Sekine, Dean of the Graduate School of Bioscience and Biotechnology, and other committee members will continue this annual symposium to provide the seeds of interdisciplinary joint research at Tokyo Tech through the integration of different fields by bringing together both domestic and international leading researchers under a different keyword each year. The committee members also hope that the symposium will provide an opportunity for young scientists outside the bioresearch fields to make breakthroughs in their own research from a biological and/or biotechnological perspective. 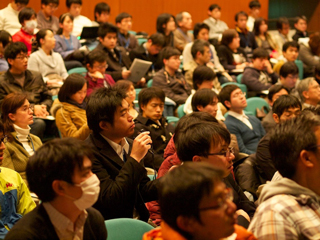 A large turnout for the symposium 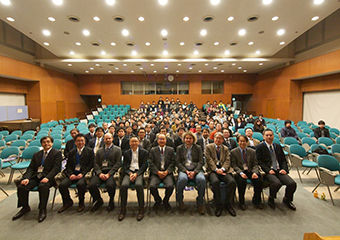 Group shot after the symposium