The laws of mathematics and physics are often used to describe areas of complex statistics, such as the transactions in global financial markets. In particular, fractals - self-similar patterns that replicate the same detailed structures at many scales - can be used to help describe fluctuations in many different scenarios, including business transactions between millions of companies and the dynamics of internet traffic.

Misako Takayasu, associate professor at the Tokyo Institute of Technology, has dedicated her career to modelling such complex systems. Now, Takayasu and her colleagues in Japan and Switzerland have developed a novel way of describing the dynamics of the order books of financial markets, by linking the transaction patterns to the random motion of particles in a fluid.

“We were asked to analyze the order book data of foreign exchange markets, specifically the US dollar-Japanese yen market,” explains Takayasu. “To help understand such a massively complex data set we turned to fluid dynamics.”

The order book of a financial market describes all orders, buying and selling, and includes all shifts in prices and volumes. Market prices are determined through these interactions. When a pair of buy and sell orders are of equal value, the transaction completes and the pair disappears from the order book - rather like the annihilation that occurs when particles meet their antiparticles.

“The database shows the creation and annihilation of detailed orders - a vast amount of information,” explains Takayasu. “With layers of data to deal with, imagining the order-book as molecules of data moving randomly, similar to particles in fluid following the laws of Brownian motion, helped us to make sense of the data.”

The researchers introduced a concept based on an imaginary colloid particle suspended in a fluid, at a location wherein the particle centre represents the mid-price of transactions (see image). The spread of possible prices for transactions are, in turn, represented by the surrounding fluid molecules. Whenever new orders are placed, the molecules change configuration and the main colloid particle shifts position.

The team completed their molecular analogy by implementing the laws that govern Brownian motion to observe and describe fluctuations in the market.

"Molecular fluid dynamics also helped us to characterize the stability of market, which has never been discussed in economics before," describes Takayasu. "We used drag coefficients to determine the 'viscosity' of the market, and the so-called Knudsen number to describe the market continuity. The smaller the drag coefficient the less stable the market is, and the larger the Knudsen number, the more likely the market price could behave erratically, as in the case of a crash."

Further development of this approach could help market analysts to describe how and why major incidents such as market crashes occur. 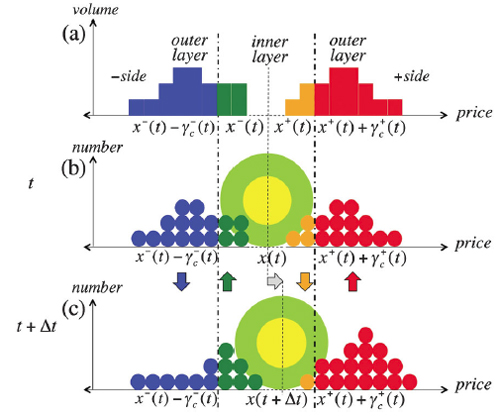 Fig.
Misako Takayasu and colleagues have created a new model describing the fluctuations in an order-book for financial markets, using the laws of Brownian motion exhibited by particles in a fluid. The centre colloid particle (green and yellow) rests at the mid-price of a set of transactions. The range of price fluctuation is described by surrounding molecules (red and blue) which knock the mid-price up or down. 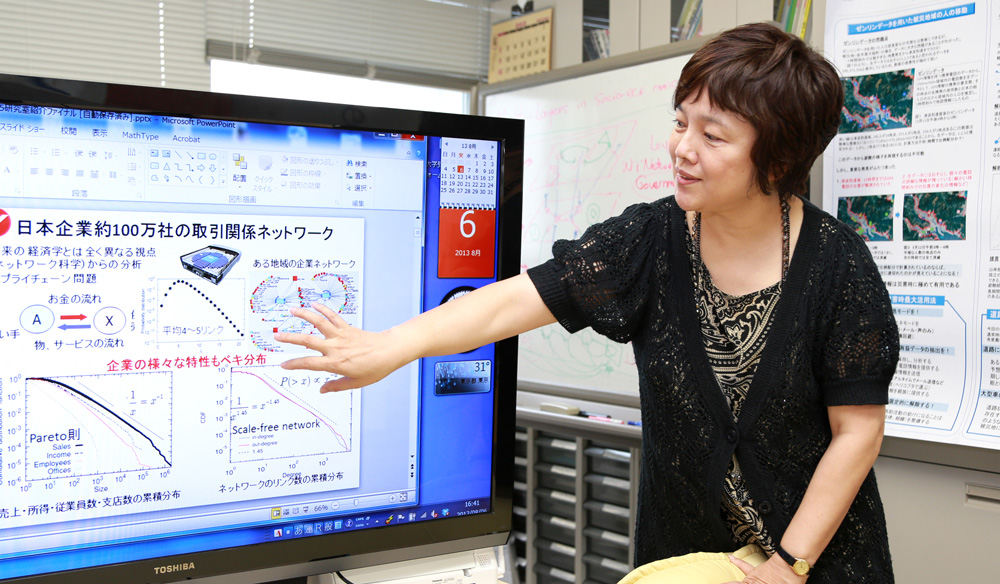