Geochemical calculations by researchers at Tokyo Institute of Technology to determine how the water content of Mars has changed over the past 4.5 billion years suggest that more than half of the initial water inventory was lost to space during the first 0.4 billion years and that as-yet unidentified reservoirs of water should exist on the planet.

A warmer more watery primordial martian landscape more closely resembling Earth has long been suggested from geochemical and geological observations. However, as Tomohiro Usui (Tokyo Institute of Technology), Hiroyuki Kurokawa (Nagoya University), and colleagues in Japan point out in their recent report “the timing, processes, and the amount of the water loss have been poorly constrained.” Their latest study using geochemical meteorite data to understand how the volume of water has changed on Mars over its history suggests that more than half of the initial water inventory was lost during the first 0.4 billion years and that there is more water present there now than has so far been observed.

Today martian water exists chiefly as ice at the poles of the planet. However geological observations of rocks containing water laid sediments suggest that lakes and oceans once existed. Previous studies have focused on putative paleo-ocean shorelines to extrapolate how much water was previously present on Mars.

In contrast the researchers at Tokyo Institute of Technology and colleagues at Nagoya University and Kyushu University in Japan determined the water quantities over the course of the planet's history based on the historical changes in ratios of the isotopes deuterium and hydrogen (D/H) in ancient martian meteorites. Since hydrogen is lighter and escapes more readily through the atmosphere into space than deuterium, the changes in the D/H ratio over the course of time can be used to determine how much water has been lost.

Their calculations revealed that more than half of the initial water budget was lost during the first 0.4 billion years of the history of Mars. The team subsequently compared their results with previous geological estimates of the primordial water volume and found discrepancies in the figures that suggest the existence of as-yet unidentified reservoirs of water on Mars at present. They propose that these should be in the form of mid-latitude ice mantles or underground reservoirs.

The observed water content of Mars is low and in the form of ice. However the existence of geological structures resembling lakes and oceans and water laid residues and sediments suggest that Mars was once warm enough to host liquid water.

Current ratios of hydrogen and its heavier isotope deuterium (D/H) on Mars are six times those on Earth. D/H ratios in different eras were determined from analyses of martian meteorite samples. Recent technical developments have allowed more accurate determination of D/H ratios. In addition while most meteorites have been aged as comparatively young - typically less than 1.3 billion years old, the recently analysed meteorite ALH84001 is aged 4.1 billion years old. For even older D/H ratios, the meteorite Yamato 980459 contains remnants of primordial water retained in the 4.5 billion year old martian mantle. 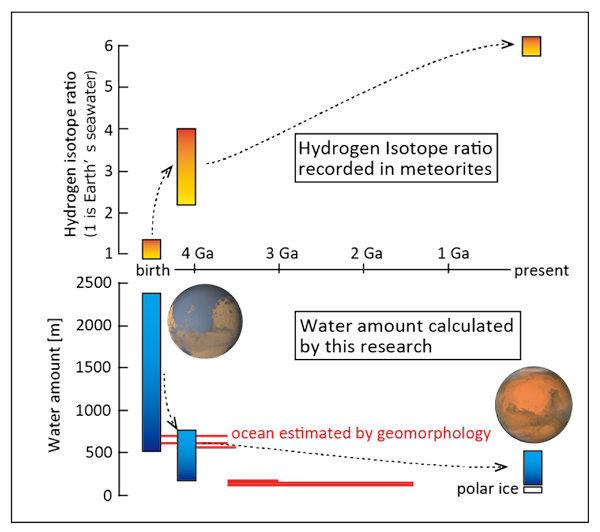 Hydrogen isotope ratio measured from martian meteorites (upper panel) and water amount calculated by this research (lower panel). Ga stands for gigaannum meaning 1 billion years ago. The results show that more than half of initial water was lost during the first 0.4 billion years and that Mars should have hidden water underground, whose amount is distinctly larger than those of polar ices.