The International Symposium and Seminar on Global Nuclear Human Resource Development for Safety, Security and Safeguards was held from February 25 to March 7 at the Tokyo International Exchange Center. The event was comprised of two parts: the symposium and seminar. The latter encompassed a series of lecture sessions and student sessions. Between the symposium and the seminar sessions, pre-registered students were able to take part in five days of field education.

The symposium covered the topics of nuclear power, nuclear security, and non-proliferation. The aim was to nurture global leaders who can respond to nuclear hazards. There were 117 participants including 20 international lecturers, 11 Japanese lecturers, 15 students from the Academy for Global Nuclear Safety and Security Agent, 24 international students, and five students from Japan.

The participants had a meaningful time as they deepened their understanding of nuclear security and non-proliferation through question-and-answer sessions with the various lecturers and through student discussions.

The symposium opened with the reading of a welcome message sent from Tokyo Tech President Yoshinao Mishima, and a welcome address given by the representative from Texas A&M University, a cosponsor of the symposium. The opening address, given by one of the representatives from the International Atomic Energy Agency (IAEA), followed. Keynote speakers came from the IAEA and the Comprehensive Nuclear-Test-Ban Treaty Organization (CTBTO). H. E. Mr. Christian Masset, Ambassador Extraordinary and Plenipotentiary of France to Japan, and Ambassador Tetsuya Endo, who served at the Permanent Mission of Japan to the International Organizations in Vienna in the 1990s, also delivered keynote speeches.

There were four themes at the symposium: Nuclear Energy in Future and Non-Proliferation Issue; Nuclear Education and Training; Nuclear Safety and Security; and, Protected Plutonium and Innovative Fuel Cycle in Future.

On February 27, 44 invited students and young professionals visited the Hiroshima Peace Memorial Park and the Monju Fast Breeder Reactor. They returned to Tokyo on March 3 for the seminar sessions.

The student sessions included video lectures by the former Deputy Director General of the IAEA and by the US State Department's Coordinator for Threat Reduction Programs in the Bureau of International Security and Nonproliferation. There was also a special lecture on Japanese culture along with lectures on the Fukushima Daiichi nuclear disaster. On the final day, students gave presentations and participated in group discussions based on what they learned in the lectures. Both international students and Tokyo Tech students from the Academy for Global Nuclear Safety and Security Agent gained valuable experiences. 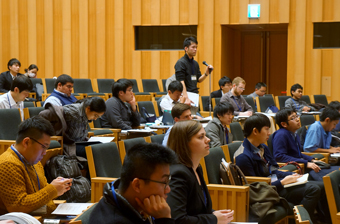 Plenary session at the symposium 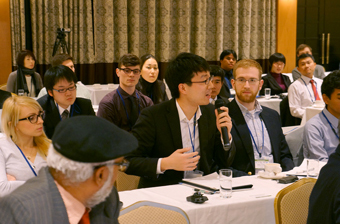 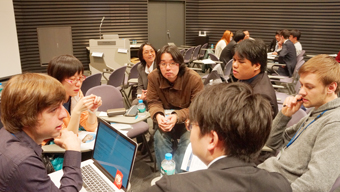 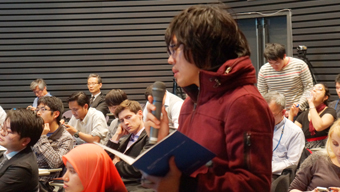 Student at a presentation