Courtesy Call paid by Dr. Jean-Luc Nahel, Advisor for foreign affairs at the Conference of President of University of France (CPU)

After greetings, Dr. Nahel explained the mission and activities of CPU and then Dr. Armel de La Bourdonnaye spoke about the French Engineering Schools Directors Council (CDEFI). The French delegation would like to forge an agreement with the Japan Association of National Universities, which works on the credit transfer system between Japanese and French universities. Therefore, Dr. Mizumoto explained the education system at Tokyo Tech after the introduction made by President Mishima.

After a question-and-answer period, some delegation members visited the Collaboration Center for Design and Manufacturing and Professor Takushi Saito gave them an overview of the center. At the same time, Dr. La Bourdonnaye met with Dr. Junichi Iijima and Dr. Norihiro Nakai. École National Ponts et Chaussées (ENPC), of which Dr. La Bourdonnaye is president, has an agreement with our three graduate schools, that enables students to get a double degree at Tokyo Tech and ENPC. They discussed future plans for student and researcher exchanges. 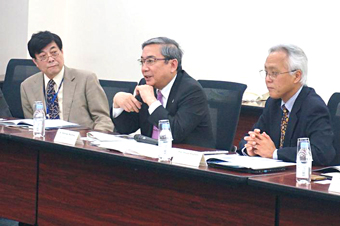