My Study Abroad presentations were made by students during the lunch break on April 15. The event takes place once or twice a month when classes are in session. Students who studied abroad on one of Tokyo Tech's many programs are asked by the International Office to give presentations on their experiences.

Four students took turns speaking about their classes and lives during their study abroad programs. Members of the audience asked many questions, and once again, My Study Abroad offered a valuable opportunity for those interested in study abroad to learn something about what it is like. 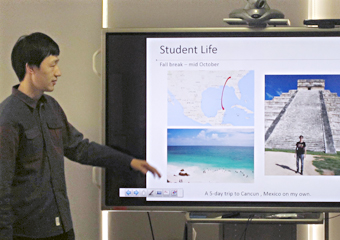 Chen Jiamin, a 2nd-year master's student in the Department of Industrial Engineering and Management, studied at Georgia Institute of Technology and gave his presentation in English. In preparation for study abroad he advised students to take advantage of Tokyo Tech's wide variety of scholarships and have a medical check-up in Japan as medical fees in the US are expensive. He noted that the Boston Career Forum job fair is a very good event for job-hunting during study abroad. 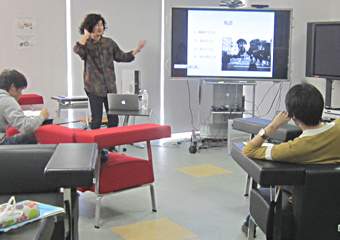 Banri Kawabata, a 3rd-year student in the Department of Biotechnology, studied at the University of Melbourne in Australia. In his presentation Kawabata said that he was impressed by the flexibility, activeness, diversity and fairness during his stay in Australia. He made use of the credit transfer system and transferred credits he acquired at the University of Melbourne to Tokyo Tech. Kawabata enjoyed his science classes as there were discussions in those classes, too. As he reflected on his life, Kawabata said study abroad represents a milestone and from here on out he is determined to further develop himself.

Chieri Yabu talking about her experience in Switzerland

Chieri Yabu, a 2nd-year master's student in the Department of Materials Science and Engineering, spoke about her experiences at the Swiss Federal Institute of Technology Zurich (ETH). She chose ETH, which is located in the German-speaking area of Switzerland, to learn a language other than English. Classes were basically given in English at ETH, one of world's top-ranked universities and the alma mater of Albert Einstein. She took ETH's high-level classes by recording them and asking questions on the same day of the classes.

The last presenter (name withheld by request) studied at the Royal Institute of Technology (KTH) in Sweden. Although the people are able to communicate well in English, KTH offers introductory Swedish classes. This student advised listeners to be proactive when conducting research by speaking with scholars and interviewing local governments. He also noted that job-hunting events are a great source of information about internships.

If you are interested in doing a study abroad or simply curious, or if you want something more out of your student life, come to a presentation.