US President Barack Obama took part in a dialogue on science and technology with young people at the National Museum of Emerging Science and Innovation (Miraikan) on April 24. Two Tokyo Tech 4th-year undergraduate students and five students from the Tokyo Tech High School of Science and Technology participated in the event. The followings are the students' reports on their experiences. 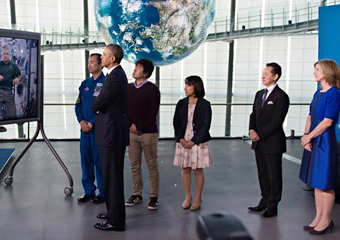 In front of the Geo-Cosmos exhibition; Ms Koizumi, third from right

President Obama entered the venue with Dr. Mamoru Mohri. We, the students, introduced ourselves to the president and together we watched a live video message from Dr. Koichi Wakata, a commander at the International Space Station (ISS). In the video, Dr. Wakata and two other astronauts greeted the president and reported on ISS activities to him.

Then we moved to the Geo-Cosmos exhibition, a 3D global organic LED panel exhibit with the image of the Earth as viewed from outer space projected on the panels. Astronaut Soichi Noguchi gave an explanation of the Geo-Cosmo exhibit. The president, another student and I operated the Geo-Cosmos to turn the globe. President Obama asked us, “Which way shall we turn the globe?” and “Are you interested in the universe?” As we operated the Geo-Cosmos, I felt myself relaxing and I could enjoy the conversation with him. He then asked us about our fields of research and our future dreams.

After viewing the Miraikan exhibits, President Obama gave a speech to the students. He expressed his hope that more Japanese students would come to the US. I felt that the president regarded and received us as independent members of society.

Through this encounter with the president, I strongly felt that the world is expecting us to pursue science and technology in a way that our studies and research can be applied to society.

Nao Yamamoto
4th-year, Department of Biotechnology, School of Bioscience and Biotechnology
(affiliated with the Global Scientists and Engineers Course)

On his visit to Japan, President Obama expressed a strong desire to meet with students. This gave Japanese students the opportunity to talk with the US president at the Miraikan. Twenty high school students and ten university students participated in the event.

The president visited four sections of the Miraikan, and I was in the second section where a humanoid robot, ASIMO, was introduced. I was one of only two university students and was lucky enough to speak with the president.

President Obama is a very friendly person. When I asked, “Would you like to kick the ball back to ASIMO?” He answered, “Sure!” and he enjoyed playing soccer with ASIMO. When he moved to the next section, the president said, “I haven't taken the time to speak with the students yet." He came back to the ASIMO section to talk to us. He asked question after question such as “What are you studying?" “How would you make use of what you study now?” “What would you like to do in the future?” and “Do you want to study abroad?" He encouraged me by saying, “Make sure to continue studying hard because your specialty is a very significant field which relates to people's health and lives.” I am studying biological information. I was very touched by the thoughtfulness that the U.S. president showed in taking time to speak with and encourage students. It was also a great experience for me to see and feel firsthand the behavior of a person in the position to lead the world. I would like to express my heartfelt gratitude for this wonderful opportunity. I will further develop my life thanks to this experience.

Kazuyuki Jimbo
I was offered this rare opportunity to listen to President Obama's speech. I work hard on English as I use the language when I code, but I had difficulty understanding some of his speech. This experience reminded me anew of the necessity of studying English.

Shumpei Abe
Contrary to the image I had of the president from top-level meetings we watch on TV, President Obama was friendly and frank. He asked me a question when we shook hands and I became acutely aware of the necessity of studying English. You have no idea when you will have the opportunity to speak English. I feel that I need to be prepared.

Nobuhiro Kasai
I realized the importance of learning English once again at this event. It was difficult to answer the spontaneous questions in English on the spot. I could not say what I wanted to say and I felt that my English skills were lacking. From this valuable experience, I am determined to participate in various events and improve my English skills.

Ryo Unemoto
I had a great time listening to the President Obama's speech firsthand. In his speech, the president talked about the necessity of Japan-US cooperation in the fields of science and technology and about some future prospects. I realized the importance of day-to-day study and now have a stronger determination to realize my future dreams.

Yuito Kawabata
I am not good at English, and this experience caused me to feel irritated at myself for not having a better command of English. I would like to make this once-in-a-lifetime chance my motivation for the rest of my life. You really don't know what will happen in your life.

This article was updated on June 13 (error in student's name)