Recognized as Tokyo Tech's annual event to promote exchange between the Institute, alumni and current students, the 3rd Tokyo Tech Homecoming Day was held with even more events including those open to the local community. 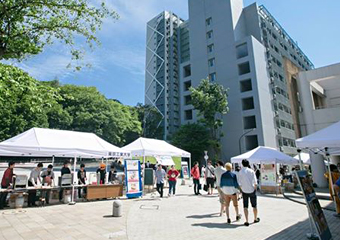 Homecoming Day 2014 at the Suzukakedai Campus was held on Saturday, May 17 to coincide with the Suzukake Festival. The event included special lectures by Dr. Kayoko Yamamoto, editorialist for the Nikkan Kogyo Shimbun, and Professor Makoto Konagai of the Graduate School of Science and Engineering followed by the Grand Reception attended by a number of alumni, academic and administrative staff and current students.

The Ookayama Campus held its well-attended Homecoming Day 2014 on a sunny Sunday, May 25 despite experiencing heavy rain a few days before the event. This year, Homecoming Day was advertised not only in the alumni magazine, Kuramae Journal, and on the Tokyo Tech website, but also on posters in the Tokyu Line's Ookayama and Suzukakedai Stations and on the Ookayama Kitaguchi shopping street. As a result, more than fifty people from the local community joined in. 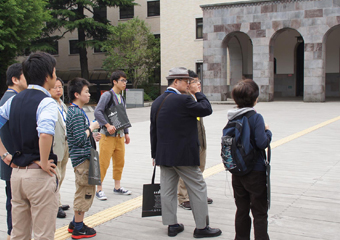 Homecoming Day at the Ookayama Campus

Tours of the campus were conducted throughout the day, guiding visitors to the Collaboration Center for Design and Manufacturing (CODAMA), the supercomputer TSUBAME, the Ookayama and Midorigaoka Areas, and the Library. Former students reminisced while being shown around the new, modern campus.

A concert by current students was held at noon in the 70th Anniversary Auditorium, beginning with an energetic performance by Los Guaracheros, a Latin jazz big band. This was followed by an excellent harmonized chorus by Chor Kleines, a choral group which has placed first in the Japan Choral Association's National Choral Competition for the past sixteen years. 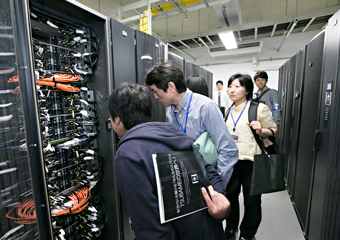 Tour of the supercomputer, TSUBAME

Following the concert, special lectures were held in the Auditorium. The first presentation was “Connecting customers - through the experience of the Great East Japan Earthquake” by Mr. Masayuki Yamamura, president of NTT East Corporation. Attendees were impressed by the efforts made by all NTT East staff in rebuilding the area's communication infrastructure after the disaster. The second presentation was “The origin of the Earth, the origin of life” by Professor Kei Hirose, director of the Earth-Life Science Institute (ELSI). His presentation included an academic discussion on the curiosity-inspiring question “Does extraterrestrial life exist?” 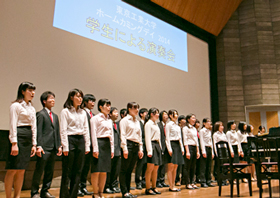 Current students joined the event to show off their group activities. These included juggling by Jug-Tech, disaster relief efforts by the Tokyo Tech Volunteer Group (VG), tea serving by the Tea Ceremony Club, a vintage car display by the Auto Club, a demonstration of an electric vehicle called Econo-move by Meister, various other demonstrations by several clubs on design and manufacturing at the West Bldg. 9 and a match organized by the Soccer Club at the sports ground. 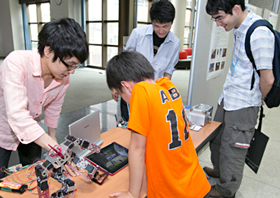 Demonstrations on design and manufacturing
at West Bldg. 9

From 4:30 p.m., the Grand Reception was held on the ground floor of the Tokyo Tech Front. There were tables for each department or study field and attending graduates enjoyed renewing old friendships. This year, additional tables for the former members of student clubs, such as the Athletics Club and the Japanese Archery Club, and the student exchange program JAYSES (Japan-Asia Young Scientist and Engineer Study Visit) were set up. These attracted both younger alumni and current students. The reception was officially opened by President Yoshinao Mishima and speeches were delivered by Mr. Etsuhiko Shoyama, the president of the Tokyo Tech Alumni Association, Mr. Isao Ono, the Vice President for Fund Development and Mr. Yoshio Ishida, the director of the Tokyo Tech Alumni Association, Tokyo Branch. The attendees were also entertained by alumni of the male choir club, Schwalben Chor.

Homecoming Day 2014, jointly sponsored by Tokyo Tech and the Tokyo Tech Alumni Association, ended at 6 p.m. and was a successful and symbolic day of strengthening ties between alumni and their alma mater. 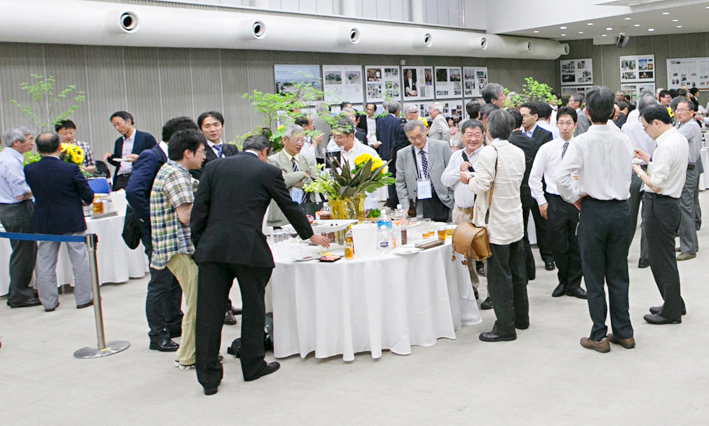 The Grand Reception held at the Tokyo Tech Front