The membrane molecular machinery that is necessary for membrane integration of protein and for development of artificial cell has been successfully synthesized in a test tube by the research team of Dr. Yutetsu Kuruma (WPI-Researcher of Eearth-Life Science Institute, Tokyo Institute of Technology) and Prof. Takuya Ueda and Mr. Hideaki Matsubayashi (Graduate School of Frontier Sciences, The University of Tokyo). The membrane molecular machinery was synthesized using an in vitro protein synthesis system called as the PURE system (1) developed by Prof. Ueda and allowed to synthesizing membrane proteins in the same process as a cell. This result leads not only to the construction of artificial cell that is capable of autonomously synthesizing membrane proteins, but also to the development of a fully controllable in vitro tool for production of membrane protein.

In order to understand the mechanism of living cell, a research approach that aims to construct a living cell by assembling bio molecules (such as DNA, proteins, and lipids) has been getting much attentions. However, constructing of cell membrane that encapsulates these cellular biomolecules has been quite difficult and limited the realization of the artificial cell. This is because that there has no been the valid procedure to construct membrane protein which can be functional on a cell membrane.

This achievement has been published on the journal of German Chemical Society “Angewandte Chemie International Edition” at June 4th, 2014, as an online flash report version. 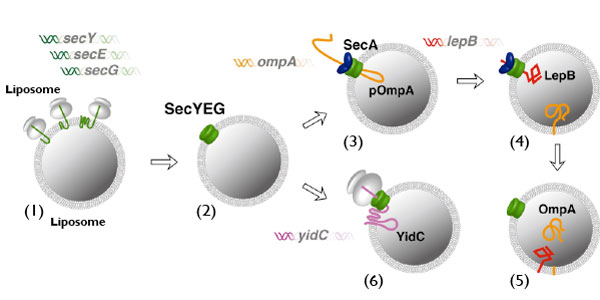 SecYEG is synthesized in the in vitro protein synthesis system, the PURE system, where containing liposomes by introducing the genes of SecY, SecE, and SecG (1)(2). After the synthesis of SecYEG, pOmpA (precursor of outer membrane protein A) is synthesized by introducing the ompA gene and a cytosolic factor SecA is added to translocate the synthesized pOmpA into the liposome lumen (3). The translocated pOmpA is anchoring on the lipid membrane of the liposome inside. Then, the gene of lepB is introduced for the synthesis and translocation of LepB (4). The translocated LepB cut off a part of the previously translocated pOmpA and the resulting OmpA, which is the mature form of pOmpA, is released into the liposome lumen (5). Additionally, SecYEG is able to integrate YidC, which containing six trans-membrane helices, into the membrane (6).

(1) The PURE system
A reconstructed in vitro protein synthesis system consists of 37 kinds of factors involved in the reaction of protein synthesis. Each factor was individually purified from E. coli and reassembled in a test tube. Starting the addition of DNA, the target protein can be obtained after a few hours incubation.