A research group including Associate Professor Atsushi Shishido and Graduate Student Norihisa Akamatsu, of the Chemical Resources Laboratory at the Tokyo Institute of Technology, Professor Jun Takeya, of the Department of Advanced Materials Science belonging to the Graduate School of Frontier Sciences at the University of Tokyo, and Associate Professor Shigenori Fujikawa, of the International Institute for Carbon-Neutral Energy Research (WPI-I2CNER) at Kyushu University, has developed a simple measurement method for surface strain on specialty films. By labeling light diffraction gratings (1) to film surfaces, they proved they could carry out simple quantitative measurement of surface strain (2) due to film bending.

Furthermore, they discovered that layered films comprised of photoresponsive films and silicon rubber display deformation behavior largely diverging from conventional solid mechanics. This shows that the mechanics of soft materials (soft mechanics) differs largely from conventional solid mechanics, which deals with hard materials, and is expected to provide impetus for the development of wearable devices and flexible displays accompanying progress in soft mechanics.

The development of wearable devices and flexible displays requires the layering of functional flexible films, but until now there had been no simple method to measure surface strain, which is the key to preventing deformation and destruction.

The results of this research appeared in the electronic version of the English scientific journal “Scientific Reports” on June 20th. 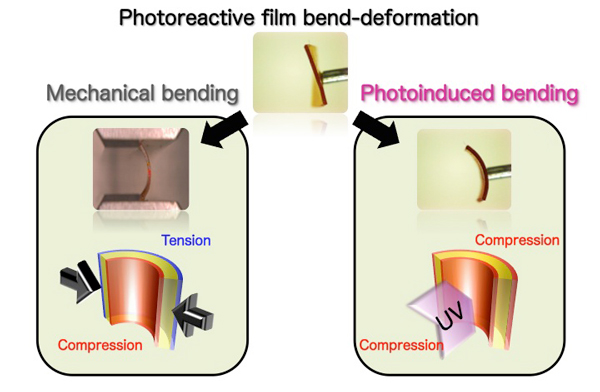