The orientation was followed by an exchange party, with addresses by Executive Vice Presidents Takashi Tatsumi and Kiyoshi Otani, and a speech by guest speaker William Ireland Milne on internationalization in Japan. Professor Milne is a faculty member of the University of Cambridge in the United Kingdom and is currently engaged in collaborative research at Tokyo Tech's Quantum Nanoelectronics Research Center. He is also the first professor to be supported by Tokyo Tech's new Invitational Program for Faculty from the World's Top-Level Universities. 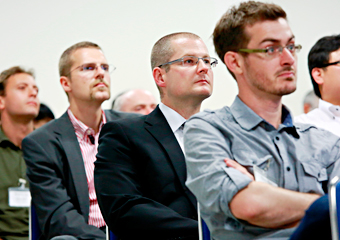 Attendees at the orientation

A variety of food and drink were served, including sushi, vegetarian and halal dishes, and a sake made by a former Tokyo Tech student called Asashibori. The event closed with an address by Dean of the Graduate School of Information Science and Engineering, Naoki Yonezaki, who taught the attendees how to perform ipponjime, the Japanese custom of handclapping to close an event.

To all of the attendees, thank you for a lovely evening!

Interviewing attendees at the exchange party