A research group including former graduate student Natsuno Suda, and Associate Professor Mikiko Tanaka and Professor Takehiko Itoh, of the Tokyo Institute of Technology's Graduate School of Bioscience and Biotechnology, and Professor Katsuhiko Shirahige, of the Institute of Molecular and Cellular Biosciences at the University of Tokyo, have succeeded in clarifying the detailed mechanism behind cell death, which is essential when organisms are formed.

The research group discovered that, in the limb developmental process, "MafB" AP-1 transcription factors (2), which are controlled by proteins called "BMPs" (1), form dimers by bonding with other AP-1 transcription factors, and that by means of this the fate of whether limb cells live or die is determined. It is expected that these results will lead to understanding of the mechanism behind cell death, which has a function in the morphogenesis of various organs and tissues.

When the shape of a body is made, the shape of organs and tissues is adjusted as appropriate according to cell death - where appropriate amounts of cells voluntarily die in appropriate locations. It was well known that, in the limb developmental process, cell death occurred between the wrists and fingers, and that limb cell death is controlled by BMP, which is specifically expressed in the regions causing cell death. However, until now it had been mostly unclear what mechanism controlled cell death downstream from BMP.

This research was a joint effort between the Tokyo Institute of Technology, the University of Tokyo, Yokohama City University, and the University of Bath in England. The results were published in the online version of the International Developmental Biology Journal "Development" on July 8th. 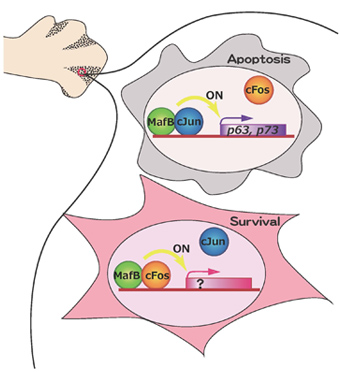 Figure 1.
The structure controlling the fate of whether limb cells live or die

(Top) When the dimer partner of the MafB (green) is cJun (blue), the expression of p63 and p73 genes (purple) promoting cell death is activated, leading to apoptosis.

(Bottom) When the dimer partner of the MafB (green) is cFos (orange), it leads to survival.