The heat equation is one of the most important partial differential equations. The behavior of the solution to the equation reflects the geometry of the underlying space very well. Therefore, this equation has been investigated very extensively in both analysis and geometry. The solution evolves over time so that the Dirichlet's energy functional decreases most efficiently. Recently, F. Otto introduced another characterization: the solution evolves so that the Boltzmann entropy increases most efficiently from the viewpoint of optimal transportation. Both of these characterizations enable us to study the heat equation on spaces admitting singularities, where usual differential calculus does not work. However, their identification in such spaces is unknown.

Now, Tokyo Tech mathematician Kazumasa Kuwada, together with Nicola Gigli (Nice) and Shin-ichi Ohta (Kyoto), have provided a first identification result for this question by reducing the problem to the uniqueness of the second characterization. Their result is closely related to the theory of Ricci curvature in terms of optimal transportation by using the Boltzmann entropy, which appears in the second characterization. Furthermore, Kuwada and his collaborators revealed a connection between this theory and another Ricci curvature theory present in the first characterization, known as Bakry-Émery theory. Their completely new approach will open the door to further extensive studies on geometric analysis of non-smooth spaces, and will help further understanding of the curvature of space. 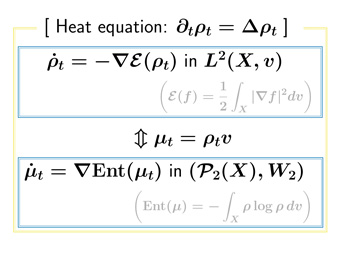