Success in the simple synthesis of organofluorine medicinal/agrochemical intermediates

At the Chemical Resources Laboratory at the Tokyo Institute of Technology, Assistant Professor Takashi Koike, Professor Munetaka Akita, and Graduate Student Ren Tomita succeeded in directly synthesizing useful trifluoromethyl ketones as medicinal/agrochemical intermediates from easily acquired alkenes (1). This was made a reality by the development of a new reaction system enabling the direct synthesis of alkenes using photocatalysts called photoredox catalysts (2).

A feature of the developed reaction system is its ability to enable the reaction in the mild conditions that constitute room temperature using photocatalysts that act under visible light (LED lamp radiation). Fluoroalkyl groups (3), including trifluoromethyl groups, have a big influence on the chemical/metabolic stability and bond selectivity in pharmaceutical products, and are known to deliver improvements in drug activity, so the new reaction system is expected to see extensive use in the field of medicinal/agrochemical product development in the future.

The results of this research were published in the influential German scientific journal "Angewandte Chemie International Edition," on July 7th and also chosen as the frontispiece.

The general name for a compound having one C=C-binding with unsaturated hydrocarbon. For example, carbonyl compounds (organic compounds having >C=O) such as ketones are obtained by oxidizing alkenes with ozone. 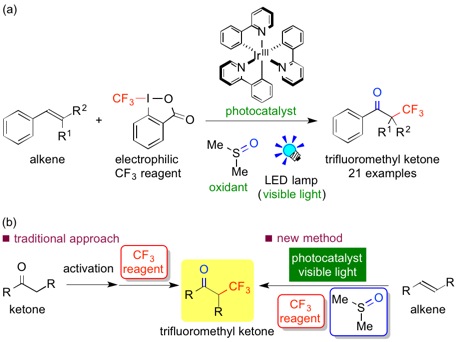 The results of the research (a): A comparison between the traditional approach and new method for oxidative trifluoromethylation of alkenes using photocatalysts (b)