TSUBAME-KFC supercomputer ranked No.1 in the world in two consecutive editions of the energy efficiency "Green500 List"

Tokyo Tech's TSUBAME-KFC supercomputer, which employs oil-immersion cooling as well as other advanced power-saving features, was ranked No.1 in the world in the June 2014 edition of the energy-efficiency supercomputer ranking Green500 List (1) , successfully retaining the top position for two consecutive editions.

The TSUBAME-KFC supercomputer was developed by the Global Scientific Information and Computing Center (GSIC), Tokyo Institute of Technology, as a prototype for its next-generation TSUBAME 3.0 supercomputer, and commenced operation in October 2013. The project is being conducted in collaboration with world-renowned domestic and overseas supercomputing vendors such as NEC and NVIDIA. In November 2013, TSUBAME-KFC was recognized as the world's most energy-efficient supercomputer on the Green500 List, which ranks the world's top supercomputers according to their energy efficiency in computing.

On June 30 it was announced that TSUBAME-KFC had once again become No.1 in the world according to the June 2014 release of the Green500, having achieved 4,389.82 MFLOPS (2) per watt. Being No.1 for two consecutive editions demonstrates the project's technological leadership for future supercomputers, whose performance will be predominantly limited by electrical power requirements as we strive towards a low-carbon society. TSUBAME-KFC was also ranked sixth in the Big Data category of the Green Graph 500 List (3) , which was started last year to rank the power efficiency of supercomputers in big data processing. 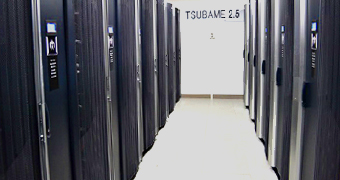 In addition, the current production supercomputer TSUBAME 2.5 that was upgraded in September last year from TSUBAME 2.0 achieved 2,951.95 MFLOPS per watt and was ranked eighth on the Green500 List. TSUBAME 2.5 was thirteenth in the world on the TOP500 List , and was again the second fastest supercomputer in Japan after the "K" supercomputer.

TSUBAME-KFC was developed as a testbed for TSUBAME 3.0, which is being planned as a successor to TSUBAME 2.5, with funding from the Ministry of Education, Culture, Sports, Science and Technology (MEXT) under the project "Ultra Green Technology in Supercomputing Clouds Information Infrastructure." The project aims to substantially reduce the power required for both the machine and the cooling system. As a project prototype, TSUBAME-KFC was designed in a way that drastically reduces the cooling power through the combination of "oil immersion cooling," where the entire system is entirely submerged in non-conductive warm oil circulating both inside and outside the compute nodes, and "ambient cooling," which uses cooling towers cooled by the natural environment without the use of power-hungry compressors.

The TSUBAME-KFC system is composed of forty compute nodes interconnected by an FDR InfiniBand network. Each compute node is equipped with two Intel Xeon E5-2620 v2 processors (Ivy Bridge EP) as well as four NVIDIA Tesla K20X GPUs (4) inside a 1U server to achieve extremely high density, accommodating forty nodes or 160 GPUs in one oil-immersion rack. The system's overall theoretical peak performance is 217 TeraFlops in double-precision floating point arithmetic, and also achieves over 630 TeraFlops in single precision, or more than half a PetaFlop per rack.

The results achieved today are the fruition of a series of research projects conducted by Tokyo Tech's GSIC. Along with the Ultra Green Project, there are a number of past and ongoing supercomputing projects such as "Ultra Low Power High Performance Computing (ULPHPC) " and "EBD: Next Generation Big Data Infrastructure Technologies Towards Yottabyte/Year" as part of the Core Research for Evolutionary Science and Technology program of the Japan Science and Technology Agency. Much of the research has also evolved around GPUs utilized for supercomputers under the NVIDIA CUDA Center of Excellence (NVIDIA CCoE) program . In addition, the results achieved by TSUBAME-KFC would not have been possible without extensive collaboration with industrial partners in both Japan and the US, including NEC, NVIDIA, Green Revolution Cooling, Supermicro, Intel, and Mellanox.

A list that ranks the world's top 500 supercomputers in terms of their power efficiency (FLOPS/Watt) in computing. It uses the LINPACK Benchmark which is also utilized by the famous Top500 List that ranks the machines in terms of their absolute achieved performance. The list was started in November 2007 and, like the Top500, the list is updated in June and November of each year. The list is increasing in its significance, as future supercomputer performance will be predominantly limited by the overall power available to the facility, and as such power efficiency will be the most important metric in a given machine.
www.green500.org

Flops (FLOPS or Floating Operations Per Second) is a primary performance index that indicates how many floating point calculations are performed in one second by a given computer. Mega, Giga, Tera, and Peta are prefix multipliers and indicate 10 to the 6th (million), 9th (billion), 12th (trillion), and 15th (quadrillion) respectively.

Similar to the Green500 List, but instead of numerical computing performance, it measures the power efficiency in processing large graphs that appears in big data processing, and as such the results are indicated by Traversed Edges Per Second (TEPS) /Watt. The list is relatively new, having started in June 2013, but will likely also gain significance alongside the Green500 List for power efficiency reasons as well as the increasing importance of big data.
green.graph500.org/

A type of many-core processor that utilizes hundreds to thousands of low-power processing cores in a single CPU chip to achieve high performance in applications via massively parallel processing. Although it was initially a special-purpose processor for graphics processing accompanying a standard CPU, over time it has become increasingly generalized, programmable, and powerful, such that it is now utilized in many applications as a general-purpose compute engine.