Professor Hideo Hosono, Dr. Jiangang Guo, Dr. Hechang Lei, and Dr. Fumitaka Hayashi of Frontier Research Center, Tokyo Institute of Technology report a new intercalate Na0.65(1)Fe1.93(1)Se2 with Tc ~ 37 K, synthesized by low-temperature ammonothermal method using liquid ammonia as a solvent. The notable finding is that the Na0.65(1)Fe1.93(1)Se2 shows a ThCr2Si2-type structure, which is the first instance of small-sized alkali metal intercalates without NH3 co-intercalation. Besides, the NH3-poor Na0.80(4)(NH3)0.60Fe1.86(1)Se2 and NH3-rich phase with Tcs at 45 K and 42 K are identified by tuning the concentration of Na-NH3 solutions. The modulation of interlayer spacing reveals the versatile evolution of structural stability and superconductivity in these intercalates.

Since the discovery of iron-based superconductors, LaFeAsO1-xFx, by Prof. Hosono et al. at 2008, numerous 'iron' based superconductors, such as Ba1-xKxFe2As2, FeSe, Li/NaFeAs, etc, have been reported, which opened a new era not only for condensed matter physics also the chemistry world. More recently, the structurally-simplest FeSe has become very attractive since its Tc (8 K) can be drastically enhanced by a factor of 5 under external high-pressure. The latest study on single-layer FeSe film shows that its electrical resistivity even vanishes at 100 K. Another high- Tc bulk superconductor derived from FeSe is an intercalated AxFe2-ySe2, which is synthesized at high temperature (~ 1300 K) but is only available for the large-sized mono-valent metal ions (A = K, Rb, Cs and Tl). The bulk Tc of AxFe2-ySe2 is 30 K, however, the origin of superconductivity and the precise superconducting composition are still under debate due to the intrinsic phase separation and inhomogeneity in these materials.

The low-temperature solution method is a promising method to prepare the intercalated phase. Actually, the FeSe intercalates obtained from low-temperature alkali metal and NH3 co-intercalation revealed a higher Tc of 30 ~ 46 K compared with those obtained by the high-temperature method. However, a detailed analysis of the separation between Fe layers (d), i. e. the optimal Li- (d ≈ 8.3 Å), Na- (d ≈ 8.7 Å) and K- (d ≈ 7.4 Å) intercalates, implies that the small cations intercalated may have more diverse coordination environments and arrangements of ligand-groups compared with larger ones. These intricate complexations of alkali metals between the [Fe2Se2] interlayers imply that the cation-intercalation potentially induces versatile intercalate especially for small alkali-metals, and need to be carefully investigated.

Multiple phases in Na-intercalated FeSe superconductors. Fitting their PXRD patterns with highly preferred orientation, the separations between Fe layers (d) are 6.8339(2) Å, 8.7082(2) Å and 11.0721(3) Å for NH3-free (Phase I), NH3-poor (Phase II) and NH3-rich (Phase III), respectively. The schematic structure of intercalates with different NH3 contents and their d values are shown in Figure 1. Figure 2 shows the superconducting transitions of three samples in the lower temperature range. Distinct superconducting transitions are observed, where the Tcs of 37 K and 45 K correspond to the NH3-free and NH3-poor intercalates, respectively. The high superconducting volume fractions, 80 ~ 100%, and the M-H loops of 2 K suggest that both phases are bulk superconductivity. The magnetization curve of the NH3-rich phase shows two transitions of 45 K and 42 K, which are consistent with the features of mixture phases. Thus, the latter Tc should be assigned to the new NH3-rich phase.

It is reported that the ThCr2Si2-type structure strongly competes with the CaAl2Si2-type, where the small alkali-metal intercalation and the smaller d would destabilize the ThCr2Si2-type. Therefore, these results show that the formation of the ThCr2Si2-phase for NH3-free Na-intercalated FeSe requires a stricter chemical environment and the unique treatment procedure compared with the NH3-containing intercalates.

The Tc of iron-chalcogenide based superconductors (FeSe: ~8K) was lower than that of iron-pnictide based ones. On the other hand, the structurally-simplest FeSe has become very attractive since its Tc (8 K) can be drastically enhanced by a factor of 5 under external high-pressure. The latest study on single-layer FeSe film shows that its electrical resistivity even vanishes at 100 K.

Since the synthesis using the ammonothermal process is a soft-process at low-temperature, and is favorable to apply to the preparation of nonequilibrium and/or metastable phase, it is useful to explore unique new superconductors. We expect that the discoveries of intercalates with a nearly intact FeSe layer could promote the further understanding of ThCr2Si2-phase superconductivity.

This work was supported by the Funding Program for World-Leading Innovative R&D on Science and Technology (FIRST) and MEXT Element Strategy Initiative to form a core research center in Japan. 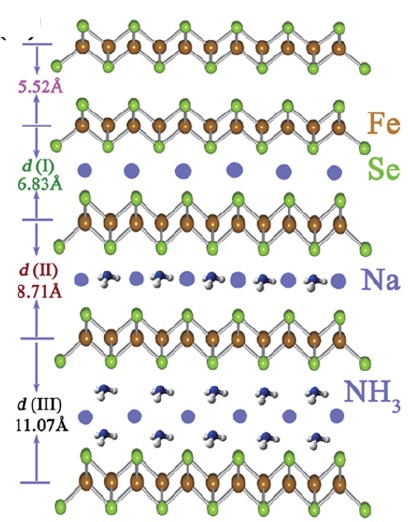 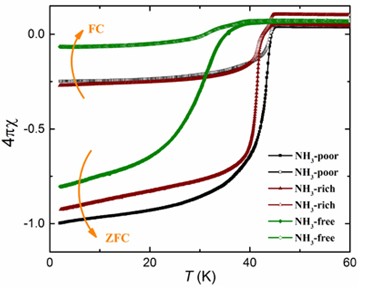