Success in observing the spatial distribution of massless Dirac electrons

Researchers from Tokyo Institute of Technology (led by Takao Sasagawa of Materials and Structures Laboratory), in collaboration with RIKEN (led by Tetsuo Hanaguri of Center for Emergent Matter Science), have succeeded in observing the spatial distribution of massless electrons (Dirac electrons(1)) which are formed on the surfaces of topological insulators(2). It has been shown that they possess a unique spatial distribution.

Topological insulators are unique materials in which, while the interior of the material is an insulator, the surface is metallic, and the electrons which sustain the metallic state of the surface of the material have no mass. Massless electrons are referred to as Dirac electrons, and the movement of such electrons can be represented as a wave function(3) having two components. The two components are related to the electron spin(4) in Dirac electrons in the surfaces of topological insulators. Novel quantum phenomena for applications in spintronics(5) could be anticipated if it were possible to control the movement and spin of electrons. To do so required the direct observation of the spatial distribution of Dirac electrons, but that had not hitherto been done.

The results of this research were published in the online edition of the UK science journal, Nature Physics (dated September 14).

Electrons which move according to the Dirac equation, which is a fundamental equation of relativistic quantum mechanics. The movements of normal electrons which have mass can be approximated using the simpler Schrodinger equation. However, the masses of electrons in solids are subject to variations from values in effective vacuums and have different values in each type of matter. In particular, as the electrons in the surfaces of topological insulators have no mass, they cannot be approximated and must be described using the Dirac equation. As far as solid-state materials are concerned, the presence of Dirac electrons has been confirmed in graphene and its organic derivatives as well as in the surface states of topological insulators.

Materials present in a special metallic form in the surface in which massless electrons carry electric charges, even though the interior of the matter is an insulator. This surface state remains quite stable, regardless of irregularities or impurities in the surface. These may find uses as spintronics materials because spin of the electrons is uniquely polarized with respect to their movement.

One of the degrees of freedom of an electron, being related to the magnetic property. It is figuratively the direction of rotation of an electron.

This is a technology which applies the two degrees of freedom of electrons, charge and spin, to information processing etc. It is a portmanteau word composed from spin and electronics.

This is a microscope that allows observation at the atomic scale of the surface topography of materials by means of a tapered metal needle (probe) which traces and scans along the surfaces of substances and maps the height of the probe. The electric current flowing between the probe and the material is controlled at a constant level during scanning in order to maintain a constant distance between the probe and the surface. When the current-voltage characteristics are mapped in place of the height of the probe, the energy resolution (spectral) electron status distribution can be obtained. 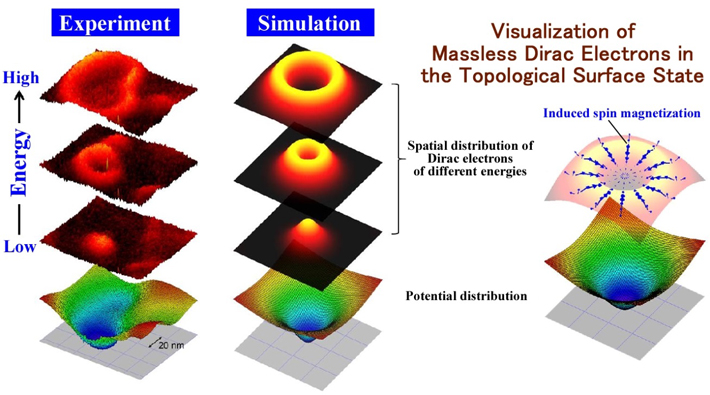 The spatial distribution of Dirac electrons was observed in experiments to project out from the bottom potential, changing and spreading into annular rings as the energy increased. This behavior was successfully reproduced in theoretical analysis, providing information relevant to the wave function. The constructed theoretical model predicted an emergence of spin-magnetization textures and suggested a novel "magnetoelectric" control of spins in the topological surface state.