Associate Professor Katsuro Hayashi, of the Materials and Structures Laboratory at the Tokyo Institute of Technology's Center for Secure Materials, and a research group including Professor Hideo Hosono, of the Tokyo Institute of Technology's Frontier Research Center, succeeded in establishing a method for the easy identification of "Hydrogen with a negative electric charge" (Hydride H− ions) formed in solids using nuclear magnetic resonance (NMR) alone. It was realized from the discovery that NMR observation limits can be compensated for by creating a correspondence with the size of the space around hydrogen in substances. Using this they provided the world's first proof that H− ions are formed in apatites, which are substances in the composition of teeth and bones.

The same group has been involved in research on H− in solid materials in order to obtain improved transfer temperatures in iron superconductors and transparent conductive membranes on cement material matrices. However, in order to actually prove the existence of H−, experiments at large-scale research facilities and the accumulation of a large amount of indirect experimental evidence was required, which also necessitated a great deal of labor. With the current establishment of an effective method to clarify the unknown H−, the expectation is for the accelerated development of new functional materials including H− ions.

The results of this research appeared in the English scientific journal "Nature Communications" published on March 24th.

This work was supported by MEXT Element Strategy Initiative to form a core research center in Japan. 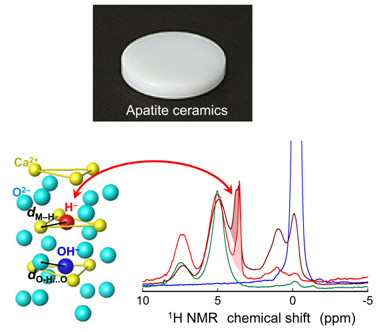 Localized structure incorporating apatite ceramics and H− ions.
Everything other than the red signal is caused by H+ (OH−) in a variety of states.