Professor Hideo Hosono and others in a research group at the Materials Research Center for Element Strategy at the Tokyo Institute of Technology focused on the layered selenium compound TlFe1.6Se2（Tl: Thallium; Fe: Iron; Se: Selenium）, which is the only Mott insulator in the group of iron-based superconducting materials, and, using an electric double-layer transistor structure, succeeded in inducing, by the application of an external electric field, a phase transition to a close-to-metal state, which can be called a precursor to superconductivity.

The results of the current research were the first observations of electric field-induced phase transition in iron-based layered materials. The carrier-creation method using the transistor structure differs from typical carrier creation involving the addition of impurities, and features the ability to freely and extensively control carrier concentration. Accordingly, it can be applied to materials for which carrier doping through element substitution is not possible, so it is expected to become a prominent method in the realization of higher superconductivity transition temperatures in iron-based layered materials in the future.

These results appeared in the online bulletin version of the "Proceedings of the National Academy of Science of the United States of America" on March 4 (March 3 in the U.S.) 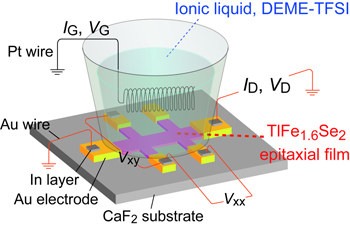 Fig 1. Schematic image of the electric-double-layer transistor (EDLT) using the TlFe1.6Se2 epitaxial film with a six-terminal Hall bar structure on a CaF2 substrate. VG was applied via a Pt counter-electrode through the ionic liquid, DEME-TFSI, contained in a silica-glass cup. Electrical contacts were formed using Au wires and In/Au metal pads.