A research group including Professor Akira Matsuzawa and Associate Professor Kenichi Okada, of the Graduate School of Science and Engineering at the Tokyo Institute of Technology, developed a 60GHz (60,000,000,000 hertz) millimeter-wave transceiver capable of transmission at 28Gb/s (28,000,000,000).

It is the world's first 60GHz-band transceiver supporting the 64QAM modulation method that sends 6 bits of information at once using both a wireless signal's phase and amplitude. In conventional methods the modulation bandwidth was unable to be widened, and transmission speed was unable to be raised above 20Gb/s. The same research group solved this problem by developing a mixer-first transmitter able to handle broadband.

The developed transceiver had its prototype made using a silicone CMOS process with the minimum wiring half-pitch of 65nm (nanometers), and wireless transmission conforming to all kinds of standards for 60GHz-band millimeter-wave wireless communication, including the IEEE802.11ad/WiGig standard, is possible. The power consumption is low: 186mW (milliwatts) for the transmitter, 155mW for the receiver, and 64ｍW for the oscillator, and the transceivers can be built into mobile phones, which will lead to the implementation of millimeter-wave radio communication.

This research result was presented on the 11th of February at the ISSCC (International Solid-State Circuits Conference) held in San Francisco starting on the 9th of February, 2014. 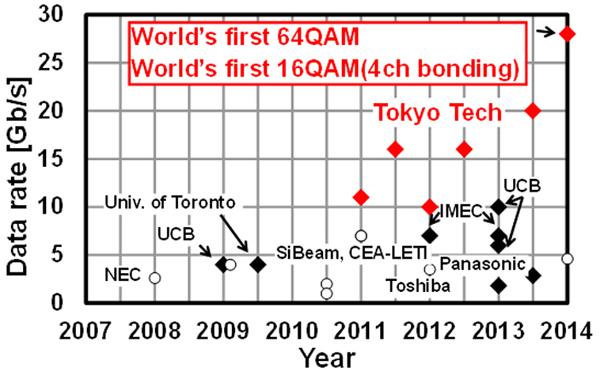