Assistant Professor Shinichiro Fuse and Graduate Student Yuto Mifune, of the Department of Applied Chemistry at the Tokyo Institute of Technology, developed a rapid, high-yield and low-cost method to synthesize peptides, which are important as drugs and bio-compatibility materials. The method used low-cost and highly active reagents, and by keeping the reaction time to under five seconds using a micro-flow synthesis technology, it succeeded in suppressing side-reactions. This method can also have applications with respect to sterically bulky and/or highly racemizable amino acids, and because it can be scaled up easily, it opens up the way for the large-volume, low-cost supply of peptides composed of a variety of amino acids.

Conventional synthesis methods have the following problems: (1) they require high-cost reagents; (2) they require the screening of reagents; (3) they produce large quantities of byproducts; and (4) reactions with sterically bulky amino acids take a long time. For these reasons the large-volume, low-cost supply of peptides composed of a variety of amino acids was extremely difficult. In peptide synthesis, using highly active reagents induces side-reactions such as epimerization, so the use of high-cost and mildly active reagents was accepted practice. The current research has transformed the way of thinking and has solved the problems in the conventional methods.

The results of this research were published in bulletin version of the German scientific journal "Angewandte Chemie International Edition," and also in the "Synpacts" section of "Synlett" magazine. 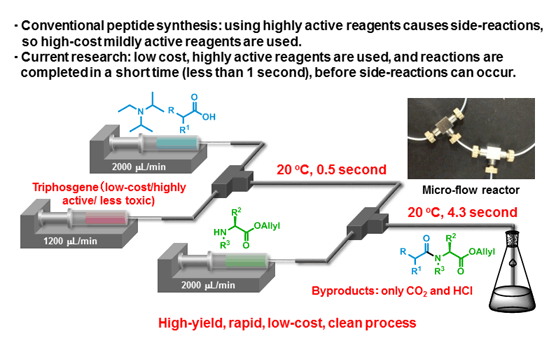